Last month I fell down the rabbit hole and landed in the most multi-faceted fashion wonderland I’ve experienced in two decades of luxury lifestyle journalism. Because far from the maddening crowds and celebrity-frenzy of New York Fashion Week happening at the same time, I absorbed a rare display of mesmerising fashion bordering on fine art that prompted me to look and feel with my own senses rather than simply sit back as a passive catwalk observer.

Of course, I was already very familiar with the storied house of Hermès…

Since its founding almost 180 years ago, the brand has been the benchmark for incredible craftsmanship, first in the creation of beautiful leather equestrian goods for kings and nobles, then eventually in fashion, watches, accessories and fragrance, all served up elegantly in that signature orange packaging. Think: the highest of high end, with an elegant disdain for flashy monikers or flamboyant ambassadors. That’s not to say the label’s not had friends in high places – Queen Elizabeth has had Hermès in her wardrobe for decades. Princess Grace of Monaco (the actor formerly known as Grace Kelly) famously fashioned an Hermès scarf as a sling for her broken arm and shielded her still-secret baby bump from the world’s press behind a black Hermès tote.

That piece, eventually named after her, became the world’s first It-bag.

And of course, we all know how the Birkin story goes – from the tale of its ’70s style icon namesake Jane to the five-year waiting lists and that episode of Sex And the City. Regardless of what we think of Kim Kardashian and her sartorial and/or social media choices, the fact she famously uses an oversized Birkin as a gym bag surely has to count for something. Studded leather Hermès cuffs at The View From Her

But beyond today’s popular culture Clic Clac bracelets,  H buckle belts and La Maison des Carrés silk scarves (which, for the record, are all spectacular proof elegant luxury accessories that verge on elitist can still be accessible) there is still a deeper artisan element to Hermès under its low-key creative director Nadège Vanhee-Cybulski. It’s not one that is old-fashioned or untouchable but rather makes lovers of beautiful things fall completely under the brand’s spell. And fall madly in China’s up-and-coming modern art district, I did.

In keeping with its low key, high stakes approach to aesthetics and business, just 48 hours after NYFW began its schedule of star-studded runway shows, Hermès hosted an exceptional one-night-only event half a world away in the equally modern and vibrant city of Beijing. Called The View From Her, it showcased the Autumn/Winter 2016 collection of fashion, jewellery and accessories (or in the brand’s words, women’s universe) in the year-old Beijing Minsheng Contemporary Art Museum. The fact that Hermès knows how to throw an incredibly elegant party is almost a given. What surprised me was the lengths gone to in the lead-up to that night to ingrain in each of the guests – VIP clients, global media, artists, stars and influencers – just how razor fine the line between Hermès‘ fashion and the creative arts actually is. It’s often said that a beautiful printed silk scarf or couture dress is a work of art, but never was it more so than there and then. The whole of the gallery’s vast space had been split into 11 separate worlds for the evening, but the first I landed in was Hypnotic Square, a spellbinding installation of 10 hand-finished scarves presented in a blur of neon colour, pulsating light and looped video that lived up to its name. In the hours that followed, we experienced high antics in a room called At The Races where all could play at an enamel bangle bar or on an old-school carnival style horse racing game. There were respectfully hushed tones as we ogled artisan-created bags, watches and jewellery in the Mineralogy Unmined room. Fine jewellery was presented on an unfinished and unfurled black Kelly bag that seemed so wrong it was perfect. Jewellery presented on an unfinished Kelly bag in the Thoroughbred room Rainbow pieces in the fun-factor At The Races room

One of my favourite spaces was labelled Secret Drawers and filled with nine exquisite ready-to-wear gowns laid flat like sleeping beauties on under-lit white drawers that gave each garment like a halo, finished off with geometric costume jewellery that formed stark contrast to delicate fabrics. One of the bias-cut dresses in the Secret Drawers room

In the Vertical room, acrobatic performers performed gravity-defying walks on walls in cool Hermès sneakers every half hour throughout the evening. Next door, past the Thoroughbred faux stable setup where queenly saddles sat beside luxurious leather bags and opportunities to drape yourself across a classic vehicles clad in Hermes-leather finishes, was Studs in Space. Back to its elite equestrian roots in the Thoroughbred room

Black walls studded with what seemed like a million stars wrapped around a circular bar, where the arms of models with with black nails, hidden races and arms loaded with studded leather bangles passed out French champagne to guests as they walked by. Studs, leather and virtual stars in the Studs in Space room

Speaking to other guests throughout the night and the following day, though, there was one eerily goosebump-inducing element we all agreed was the event’s pinnacle: a 20-minute original ballet Hermès commissioned legendary choreographer Lucinda Childs called Ensemble for Nine Dresses. In it, the bias-cut gowns laid out in the Secret Drawers room were literally brought to life in hauntingly beautiful and fluid choreography. Like leaves blowing in a swirling wind, it was impossible to see where her New York dance troupe members’ movements ended or began. Projections of the dancers onto an almost transparent screen between them and us gave it an almost ghost like feel. Seated in the row behind me, a group of sharply-tailored men clutching cocktails gasped audibly at its beauty. To say we were all moved by the performance was both far from pun and an understatement. I dare say the dance troupe, flown in from New York, are unlikely to wear such exquisite (and expensive) costumes again in near future.

Like Alice, I can’t be sure if and when I’ll stumble across Wonderland again, but in two hours I found proof that the line running between masterful fashion craftsmanship and the arts – both fine and otherwise – can be blurred if you look in the right place. I’d swap any show FROW ticket for a trip down the rabbit hole again in a heartbeat. 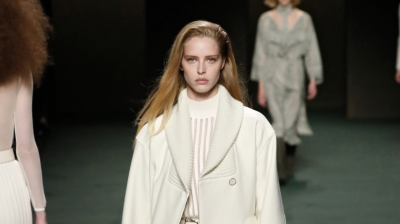