Will Hermès be the new go-to for former die-hard Céline fans?

Hedi Slimane’s new version may have alienated Philo fans, but it appears they have another French house to turn to (one that still has an accent on its ê)

Fashion has a reputation for being a fickle creature – avid shoppers move from label to label depending on the trends, street flavour of the month, and oftentimes what they spot their favourite stars wearing.

But there are designer houses that have such wildly loyal, even infatuated, fans the latter base their entire wardrobe around its aesthetic and rarely stray away, season after season.

That’s the category Cèline fell into under Phoebe Philo’s creative rein. Her clothes and accessories were the epitome of tailored Parisian cool-girl chic: classic and timeless, minimalist but still edgy, feminine and yet powerful.

Thousands of Philophites, as die-hard enthusiasts were nicknamed in the industry, were happy to shell out big bucks because they knew her pieces would span seasons. When the 45-year-old mother of three announced she was leaving the label earlier this year to focus on family, some fashion fans shed more than metaphorical tears. (For more background, read Alissa Thomas’s recent round-up for GRAZIA.)

Hedi Slimane stepping into the void in the newly-coined role of ‘Artistic, Creative and Image Director’ was the first sign Philo’s Cèline wasn’t long for this world. Famous for creating the skinniest men’s silhouette in the history of suiting during his tenure at Dior Homme, then dark, grungy, Avante-Garde, disco-princess aesthetic at the label formally known as YSL, there was no way classic, minimalist, pieces would be part of his new repertoire. (For a reminder, see Slimane’s Saint Laurent AW18 runway collection in full here.)

The first thing he did was change the logo, just as he did at YSL when he engineered the change to Saint Laurent. Weeks later, he sent his Celine Spring Summer 2019 collection down the runway at Paris Fashion Week, his front row filled with the who’s who of zeitgeist cool, including Lady Gaga, Cara Delevingne, Mark Ronson, Virgil Abloh, Karl Lagerfeld (who’s so big a fan he wore a jacket from Slimane’s Saint Laurent while doing his final bow at last year’s Chanel Resort show). There were a raft of cool musicians there too, from acts like Daft Punk, Franz Ferdinand, The Kills, Primal Scream and The Libertines.

“These were Slimane’s people, a snapshot of his cool, cultish, edgy clique.”

Then there were the fashion media, keen to see how he’d spin the big-name brand so many of them wore as a work uniform. The buyers were on tender hooks too, given his controversial changes at Saint Laurent, while sometimes unpopular, brought with them enormous commercial success.

Now the dust has settled on his SS19 runway – the most anticipated collection of fashion month, just as his Saint Laurent was in 2013 – and the reviews have been, for the most part, scathing.

Some, like that of highly respected fashion journalist Tim Blanks who labelled the collection ‘toxic’, were cerebral. “A brand that was once thoroughly identified with a peerless instinct for what women want in fashion all-of-a-sudden looked like a gust of toxic masculinity,” he wrote. “And not simply because Slimane struck an overpowering menswear chord — even if it was specified as ‘unisex’ — at a brand that made its billions addressing women with a very particular sensitivity.”

Others were more blatant in their disdain, including Instagram-based critics Diet Prada, who suggested his new Celine was a lesser version of Saint Laurent looks. “With the likes of Anthony Vaccarello and Alexandre Vauthier churning out more elevated mega-watt 80s-inspired collections in recent years, Slimane’s now look high-street by comparison,” they wrote.

The buyers have been more guarded with their barbs, probably knowing that while he’s lost the Philo Army, he’ll still create commercial gold for parent company LVMG.

“Hedi has his own style and design and they are to be respected,” said Tomomi Asako, head of women’s buying for United Arrow, told WWD. “I was looking forward to seeing how his designs would play out in a traditional house like Celine. To me, his new collection read more Hedi Slimane than Celine.”

“To be honest, I did not see any difference between the Hedi Slimane era at Saint Laurent and the Celine collection,” Alix Morabito, fashion director at iconic French department store Galeries Lafayette, also told WWD. “The world is big, the level of culture and interest quite varied and it is likely that Celine… will find a new clientele.

“One wonders though where is the Phoebe Philo line? Where can we find that Celine woman [the one with the accent] in today’s luxury universe?”

The answer to that question, in GRAZIA’s opinion, is for the meantime in Hermès stores. While the storied French fashion house certainly has its own incredibly loyal and long-time client fan-base, chances are – having seen the critically praised Hermes Spring/Summer 2019 collection also unveiled in Paris – former Cèline fans (Philo’s version with the accent è) will have a new port of call.

All the necessary elements were there: elegant tailoring, refined fabrics, powerful-but-feminine silhouettes, edgy accessories, all in earthy hues that are ideal for both work and weekend. Beautifully made, masterfully crafted, feminine and functional, these were simply beautiful clothes – a Philophile’s wardrobe dream.

Hermès also gave us the most wearable, luxe-looking version of the chunky-soled sandal we’ve seen to date. See, even the most classic fashion house can spin a trend the right way.

The bottom line: Slimane’s Celine [with its bald e] has and will get us all talking and will certainly pull its own style of fans, but until Philo resurfaces, we suspect her clientele will jump to another French house that will never change its ê. 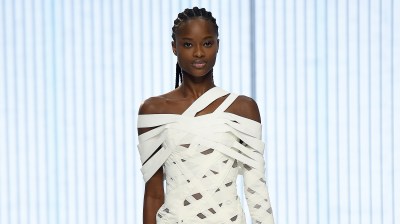