Video Exclusive: behind the scenes at Witchery's Spring runway show

Video: Crater
Last week on a chilly, dark Sydney night in the cold, blank industrial space that is Carriageworks, several hundred VIPs were whisked away to the sun-drenched, dusty salt lakes of South Australia for a taste of summer’s hottest fashions.

Rather than seating guests beside a typically long, thin catwalk, Witchery instead engaged a star set designer to create a square space that resembled the arid setting of its new Spring/Summer 2016 advertising campaign. The effect: magical.

There was an extra twist for any fans of instant style gratification: the audience – both there and watching from home via GRAZIA’s Facebook Live stream – were able to shop any pieces they fell in love with that minute on the Witchery website.

Shop the your favourites from the Witchery Spring 2016 range here. For hours before the show, teams of hair and makeup artists buzzed around dozens of male and female models backstage as they prepped for the show, which for the first time in the annual event’s history offered a fun new twist.

The call for individuality and rebellion was taken to new heights as Witchery Beauty’s Director, Kellie Stratton created customised eyeliner looks for each girl.

“I applied it with an artistic and to create a feeling of rebellious urban cool,” she explained saying she set the liner against bare, but still perfected skin for a polished finish. “Each model is treated individually depending on their eye shape and black lines are placed where it suits them most, adapting to each girl gives them an armour that empowers their brand of individuality.”

The hair conveyed the same come as you are message, with hairstylist Alan White and the team from ghd blow-drying en masse, backstage. “I wanted the hair to move on the runway,” he said. “It’s still got that looseness feeling of freedom, but it has that luxurious shine too as opposed to looking dishevelled and undone.” There were glimpses of the flatteringly soft and feminine new women’s collection before the show too, on a select group of VIP guests who had chosen their outfits from the new range: television host Carissa Walford, Miss Universe Australia Monica Radulovic, Bachelor star Anna Heinrich and entrepreneur/ model/ GRAZIA market editor Pia Muehlenbeck.

The guys were represented too: Sydney Swans star Tom Derricks and architect/ model/ This is Timothy blogger, Timothy Downsborough both turned up in head-to-toe new collection. 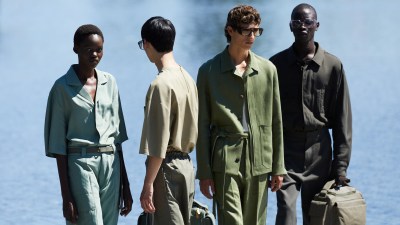