“For the girls who are coming forward… are they stretching the truth?”

Ed Westwick’s ex-girlfriend and Gossip Girl co-star Jessica Szohr has admitted the actor is in a bad way since three women came forward and claimed he sexually assaulted them.

In a new interview, Szohr said she is “shocked” by such allegations and while it’s apparent she doesn’t believe her ex-lover would be capable of such a thing, she’s cautiously remaining on the fence. The Shameless actress did however question how legitimate the women’s claims were. “I don’t even really know how to answer it, if I should, because I don’t want anything to get twisted, because I have known Ed for years and know how lovely he is, and don’t think he would ever put someone in a position like that,” the 32-year-old said. “It’s difficult, because you don’t want someone you know to go through that or do that to someone, or knowing them well, knowing that you don’t think they would, and for the girls that are coming forward, it’s like, are they stretching the truth?”

Szohr – who dated Westwick from 2008-2010 – said she has spoken with him since the allegations came to light. “I mean, he’s going through a difficult time,” she said. “He’s being accused of something that he’s publicly saying he didn’t do. So it’s, you know, tough on him. His show got canceled. You know, he’s like, ‘The truth will come out and hopefully people see that and hopefully that’s it.’ It’s just such an unfortunate thing all around. And I have to be so careful, because it’s not my situation and I don’t — I wasn’t there. So it’s hard to speak on behalf of those girls or him.”

On November 7, actress Kristina Cohen accused Gossip Girl’s Chuck Bass of raping her. Days later, another two women came forward with similar claims stating Westwick coerced them into sexual acts. The actor took to his social media channels to vehemently deny the accusations. “I have never forced myself in any manner, on any woman. I certainly have never committed rape.” But it wasn’t enough. BBC stopped production on Westwick’s new show Ordeal Of Innocence. The Los Angeles Police are currently investigating each case and the actor is reportedly “cooperating with authorities so that they can clear [Westwick’s] name as soon as possible”. 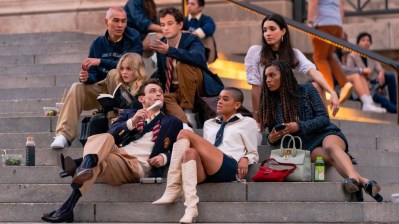