All the details, plus candid video clips of her answering questions onstage during a lightening-quick visit to Sydney last week

She’s just wrapped a hugely successful designer partnership with Tommy Hilfiger, but Gigi Hadid has wasted no time in moving on to her next fashion collaboration. The supermodel-turned-designer will drop a capsule collection of activewear with a street-chic twist created with Reebok on December 7.

The brand announced the celebrity team-up at the same time it unveiled its new global #BeMoreHuman campaign, celebrated in Sydney at a breakfast fashion show for editors and influencers, followed by an on-stage panel discussion hosted by MC Jules Sebastian.

The campaign, designed (according to the brand) to “empower females across Australia to create positive change for themselves and the world around them”, was brought to life by an on-stage discussion between Sebastian, Hadid and special guests Amrita Hepi, Amna Karra-Hassan and Kelly Cartwright, all of whom have overcome physical, mental and social barriers to make their personal mark.

Reebok and I just get each other. I work with brands I genuinely connect with, that way I feel I can most passionately talk about what I’m doing,” Hadid said at the event, before introducing some of the pieces from her new range, which will include retro-look trainers (designed for actual exercise, not just aesthetics) and a T-shirt featuring ‘cut here’ lines so yours resembles her signature cropped tank lengths.

“I really wanted to bring Reebok’s heritage and my heritage as an athlete, together.”

“You guys will see … that there are these little kinds of details where I brought my own style, my own heritage, and personality into the pieces. The new colours and the new shapes are stylish, but also really powered towards the gym.

“I’d always close my eyes [when designing them] and feel myself back in my high school gym or at my club volleyball tournaments. I wanted them to be fabrics that you can genuinely workout in and sweat in and for that they needed to be comfortable as well and there for real athletes.” 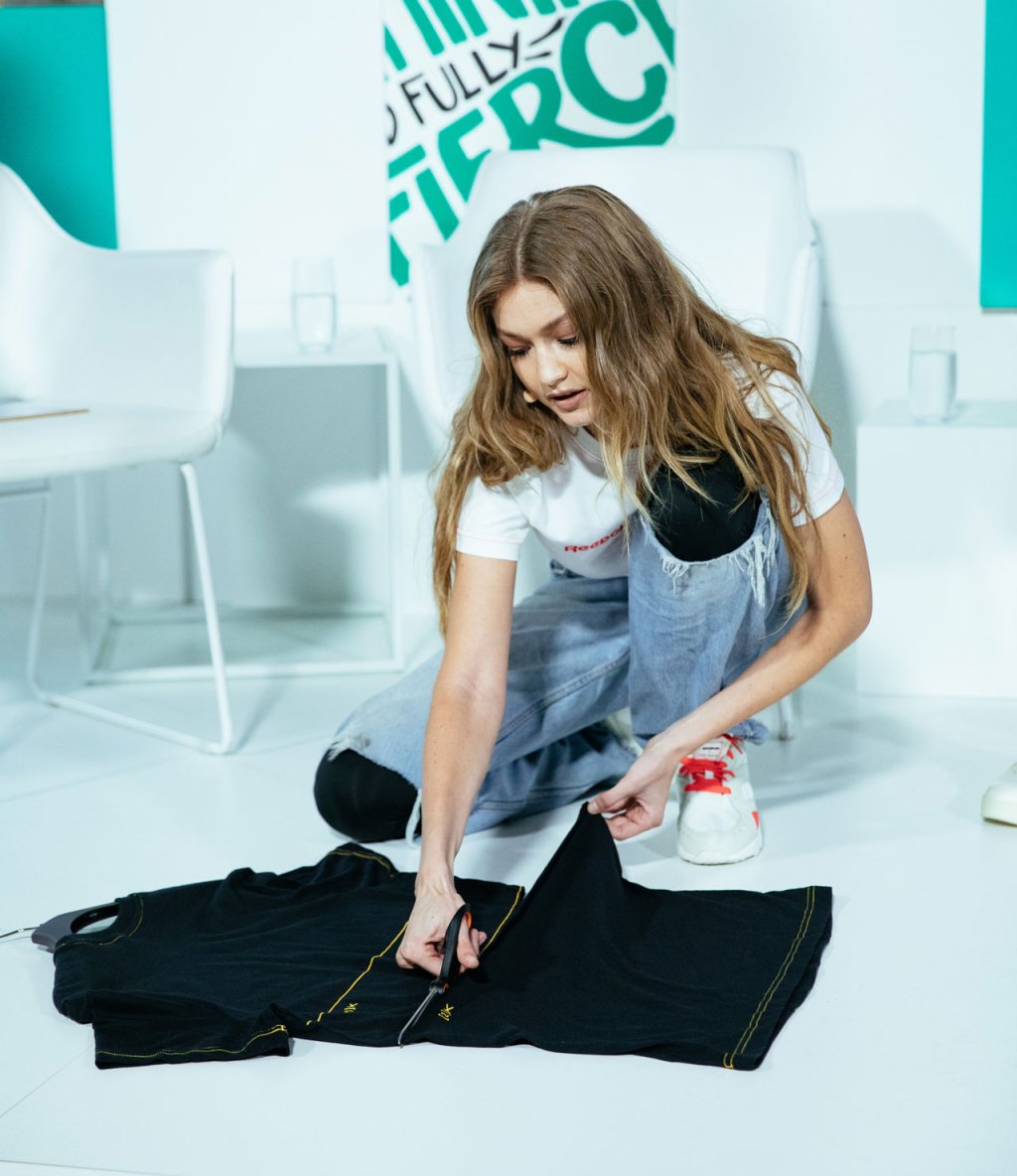 The California native, dressed in jeans and pieces from her own Reebok Classic by Gigi Hadid collection, even brandished a pair of scissors and demonstrated how easy the customisation is while on stage. “I’ll just kind of take my kitchen scissors and start cutting, but I think people are intimidated to do that,” she said. “[But] if you just cut right under the line [it becomes] this higher G crop that I’m wearing here.”

Her collection’s shoes might look cool, but unlike other fashion trainers, are actually meant for exercise. “For the ‘Dad Shoe’ trend, you’re paying thousands of dollars for a shoe you can’t work out in,” Hadid said. “These shoes are trendy but you can also wear them to the gym and your foot is healthy and safe in them, which is great.”

How does the Hadid, a self-confessed athletics buff, feel about being part of the Reebok design family? She answers the question herself in this short video clip from the Carraigeworks event.

“Reebok and the team mean a lot to me because they see me as I see my best self, which is me as an athlete, me as a hard worker, someone that is competitive when I’m in game mode, competitive with myself and I always want to be better,” she said.

The irony of a seemingly flawless supermodel being cast in a campaign called #BeMoreHuman – also featuring artists and athletes including Gal Gadot, Danai Gurira and Nathalie Emmanuel – isn’t lost on Hadid, but explains the reasoning behind it beautifully in this clip (below) too.

“Regardless of who you are or what you do, you are always allowed to give yourself room to screw up and learn and grow,” she answered. “Just because other people see you as perfect, that isn’t the pressure you have to put on yourself.”

The Reebok Classics by Gigi Hadid collection drops on December 7, 2018.