One is a little... raunchy

If you’ve ever laid eyes on the flawless, glowing visage of Gemma Chan – whether IRL or simply via URL – you’ll no doubt be eager to know her skincare secrets. While the Crazy Rich Asians star likely owes some of her radiance to good genes (damn), we’re happy to know that she does in fact invest her time in a high performance skincare routine.

In a new video Chan blesses us with her entire skincare regimen, which centres around de-puffing tired skin and delivering intensive hydration. But surprisingly, Chan’s routine isn’t as extensive as you might assume – well, compared to her Hollywood contemporaries, anyway.

After cleansing, she starts off her skincare routine with a hydrating serum. “I am using L’Oréal’s Hyaluronic Acid Serum, which works really well,” she says as she pats the product over her skin in the video. “I had quite a late night last night. I haven’t had much sleep, feeling quite tired, but hopefully I’m going to wake up my face a little bit… I don’t always – well, very rarely – get enough sleep.”

Next, she tackles the biggest give-away when it comes to a tired complexion – the under eye area, where she carefully applies The Inkey List’s Caffeine Under-Eye Serum ($15). “My secret weapon is a caffeine eye cream,” Chan explains. “I just very, very gently dot under my eyes [to] hopefully encourage a bit of drainage of the puffiness.”

To further de-puff, Chan then uses FOREO’s Iris Eye Massager ($179) – although she has a slightly raunchier nickname for the device. “So this baby, I call my eye-brator, which is not its actual name,” she says with a grin. “It’s an eye massager and it mimics the tapping motion of a Korean facial, just to encourage drainage.”

The actor admits that she relies on the de-puffing tool most mornings. “I sit in the car on the way to work at three or four in the morning, just with this. It does that [vibrating] thing, which looks quite aggressive, but actually feels pretty nice. And you can also put it right into [the inner corner].”

She then runs a Joanna Czech Facial Massager ($290) over her skin, followed by an application of Augustinus Bader’s cult moisturiser The Rich Cream ($173). She finishes by slathering on a generous amount of Laneige’s ever-popular Lip Sleeping Mask in Berry ($28).

And just like that, Chan is visibly de-puffed and radiant – so you best believe we’ll be setting our alarms that little bit earlier to try her tricks.

In Paris For Fashion Week? These Are The Beauty Spots You Can’t Miss 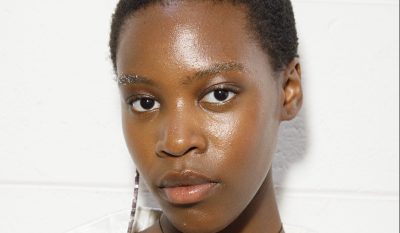 Nourishing Skin Balms Are Having A Moment. Here Are 5 Of The Best
Next page