The search for ‘summer water’ in the south of France

In honour of Bastille Day, four châteaux for your consideration should a rosé-coloured European summer be on the cards You don’t have to book an airfare to know that Provence is a veritable, picturesque smorgasbord – the sun-soaked lifeblood of which is arguably rosé.

Provence is “the home of rosé,” says Jono Jenkins, a former rugby union player turned émigré and co-founder of Rosé Imports, a specialist wine distributor only recently launched. “Eighty eight per cent of the region is dedicated to making the European Equivalent of ‘summer water’,” Jenkins told GRAZIA in between what are imaginably arduous days spent scouring the region for the best rosé – the kind that will inevitably be a hit once it arrives on Australian shores just in time for the warmer months.

One such tipple, Les Amis, is considered something of a flagship drop for the company. Hailing from Château Maylandie in the heart of the region Corbières, the wine is emblematic of the collective’s founding ethos: crisp, moreish and (aptly-enough) inviting – perfect for imbibing in the company of those from whom the wine takes its name.

Of his adopted hometown, Jenkins adds that while “wine has been made here for over 2,600 years, making Provence the oldest producing wine region in France, for me, it is the one region that [also] stands out as it exudes what a French summer is all about.”

Herewith, Jenkins provides those with Provence on the agenda his recommendations for a ‘château crawl’ through the South. Santé.

Côtes de Provence
Chateau de Pampelonne
“Drive south towards Saint Tropez and head to Château de Pampelonne. This magnificent 17th century chateau is situated just behind St-Tropez’s famous Plage de Pampelonne. If you don’t mind sharing your stretch of sand, this beach is lined with toned, tanned bodies and extravagant beach clubs. Try Club 55, where you can have a bottle or two of rosé over lunch and, if you have a few too many over a long lunch, grab a room for the night in Saint Tropez.”

Chateau d’Esclans
“Not far from Saint Tropez is the home of arguably one of the most well known rosés, Whispering Angel – everyone knows the image of the two cherubs who have inspired the creation of Whispering Angel. Château d’Esclans is truly magnificent, located on an exceptional site on elevated land near the Gorges de Pennafort on the Mediterranean coast. The original château — of which now only the cellar remains — dates back to before the 12th century.”

Bandol
Château Salettes
“Head west to Bandol, and the 17th century Château Salettes. Situated on the Mediterranean coast between Toulon and Marseille, Bandol is on the Mediterranean coast and its vineyards stretch along the sunny southern hillsides, on rocky limestone soil. Château Salettes is situated at the foot of the hilltop village La Cadière d’Azur and the vineyard is planted on a gentle slope overlooking the azure waters of the Golfe de Saint-Cyr-les-Lecques, ideal for the vines to soak up Bandol’s abundant sunshine. The rosé is aged a minimum of eight months in wood (unique for a rosé), giving the wine an orange colour.” Lourmarin
Chateau Constantin
“Head north towards Aix-en-Provence near the quaint picturesque village of Lourmarin, best described by Peter Mayle in A Year In Provence. Here you will find Château Constantin and the famous Williams Chase Rosé. At Château Constantin the wine making starts in the vineyards, and with an Aussie at the helm, there is no doubt that the wine is of exceptional quality, aided by the sunny climate and the cooling influence of the famous Mistral wind.” 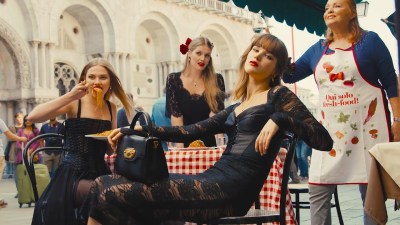 GRAZIA’s At Home City Guide To New York
Next page