“It was very interesting to see this guy – this narcissistic, self-focused, constantly-stirring-the-pot kind of guy – against this incredible, qualified woman…” As one New York Times reporter put it; American tennis great Billie Jean King did “more for the cause of women than most feminists can achieve in a lifetime.” And today, Emma Stone who is playing the athlete in a new film fervently concurs.

The year was 1973 and pompous Bobby Riggs attempted to humiliate women everywhere when he publicly gloated that any decent male tennis player – even an ageing has-been – could beat the best woman. Riggs – a loud and brash former Wimbledon champion – challenged (read: baited) the world number 1, King, to a joust in an exhibition known as Battle Of The Sexes (“I’ll play her on clay, grass, wood, cement, marble or roller skates,” he famously said. And she convincingly beat him 6-4, 6-3, 6-3.

Stone, who plays King is the movie of the same name drew comparisons to 2016’s presidential election; Donald Trump VS Hillary Clinton. “The parallels in this movie are pretty fascinating,” Stone told Out magazine in a new interview. “We began shooting in the spring of 2016, when there was still a lot of hope in the air, and it was very interesting to see this guy—this narcissistic, self-focused, constantly-stirring-the-pot kind of guy—against this incredible, qualified woman, and at the same time be playing Billie Jean, with Steve [Carell] playing Bobby Riggs.”

“Obviously the way this has all panned out has been fascinating and horrifying, and it still feels like we’re in a bad dream, but those parallels make sense to me,” she said. 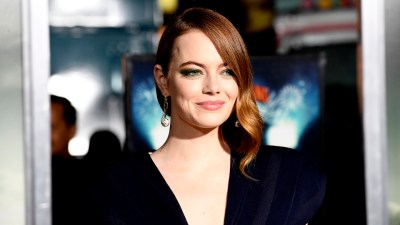 Emma Stone Has Given Birth To A Baby Girl
Next page