In Two Words, Emily Ratajkowski Summed Up How We’re All Feeling

Emily Ratajkowski is no stranger to activism. The supermodel was famously arrested in Washington for protesting the appointment of US Supreme Court Justice Brett Kavanaugh in October 2018 and now, just over a year later, she’s taking a public stand against another powerful man: Harvey Weinstein.

Yesterday, to the dismay of women everywhere, the New York Times reported that after a two-year legal battle, the disgraced film producer had reached a US $25 million settlement with dozens who have accused him of sexual misconduct and assault.

Journalists Meghan Twohey and Jodi Kantor, who broke the original Weinstein story in 2017, say this would mean the 67-year-old would not have to admit any wrongdoing – to this day, Weinstein has denied all claims of non-consensual sex – and, furthermore, the money won’t even come out of Weinstein’s pocket. Rather, it will be paid by insurance companies representing the producer’s former studio, the Weinstein Company.

In response to the news, Time’s Up, a woman’s advocacy group formed in the wake of the Me Too movement, condemned the alleged terms, writing on Twitter, “If this is the best the survivors could get, the system is broken.”

Emily Ratajkowski has thoughts on the matter too – and hers couldn’t be more straight to the point. Attending the premiere of Adam Sandler’s new film, Uncut Gems, with husband Sebastian Bear-McClard, Ratajkowski made her feelings towards Weinstein’s settlement clear, lifting her arm on the red carpet to reveal the words, “F*** Harvey” written in black marker.

Later, Ratajkowski explained her message to her 24 million Instagram followers, writing, ‘Today Harvey Weinstein and his former studio made a $25 million deal with his victims. Weinstein, accused of offences ranging from sexual harassment to rape, won’t have to admit wrongdoing or pay his own money.’ She ended the message with the hashtag ‘#nojusticenopeace.’

Today Harvey Weinstein and his former studio made a $25 million deal with his victims. Weinstein, accused of offenses ranging from sexual harassment to rape, won't have to admit wrongdoing or pay his own money. #nojusticenopeace

One more time for the people in the back, Em. 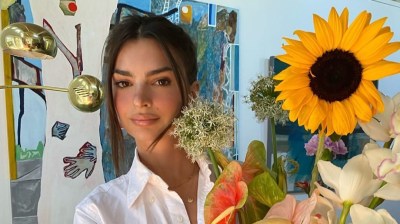