“What If Women Ruled The World?” Dior’s Golden Hope For Femininity And Fashion

Maria Grazia Chiuri has been a mission during her tenure at Dior. Since blasting the words of Nigerian writer Chimamanda Ngozi Adichie’s “We Should All Be Feminists” across a white t-shirt in her debut collection, she’s continued her feminine pursuit, imbuing her work with the feminist works of others. In the collection following, another feminist slogan, this time from American art historian Linda Nochlin’s 1971 essay – “Why are there no great female artists?” – blasted across Breton stripes. Seeking to grasp the complexity of relationships between feminism and femininity, it’s been an on-going dialogue with writers, researchers and artists, and one that culminated, perhaps most blatantly, today in Paris.

Inside the gardens of the Musée Rodin, a kind of reimagined birthing canal was erected. Conceived by iconic American second wave feminist artist Judy Chicago, ‘The Female Divine’ served as a sanctuary, a stage and a monumental artwork all in one. But above all else it represented a tribute to, and re-appropriation of, an ancestral power that goes beyond the idea of procreation. Although specifically commissioned by Grazia Chiuri for Dior’s Haute Couture Spring Summer 2020 show, it was an idea Chicago actually had back in 1977, finally coming to fruition today in Paris.

Inside the womb-like installation, Grazia Chiuri’s conversation with Chicago – and more broadly feminism – continued. “What if Women Ruled the World?” read a large quilted plaque; a question first posed by Chicago – and what was to become the crux of Chiuri’s haute exploration.

At its heart, the fundamental link between fashion and the body, a connection that birthed a powerful reimagining of the peplos, a Greco-Roman garment of timeless modernity, which Chirui reinterpreted as an evening dress. Anchored in antiquated drapery (and fellow ancient tropes such as braiding), the drape, with its clean line, followed the curve of the body and gave structure to the silhouettes, such as fitted jackets with loose collars, and skirts and pants transformed into tuxedos in more masculine materials – like houndstooth and herringbone – woven with gold. Gold, as it were, was recurrent throughout, and like a divine procession, girls walked like goddesses dripping in Dior gold. As she developed her looks, Chiuri drew inspiration from classical representations of goddesses, such as the majestic allure of Athena (as expressed in the iconic works of Sandro Botticelli). This union of intellectual strength and aesthetic harmony was keynote to Chiuri, and further expounded via the collection’s key motifs — golden, wholesome ears of wheat — symbolic of the unstoppable creative force of the female.

Recalling the women and costumes of antiquity also explores the question, “Are Clothes Modern?”, which is a recurring thread in Maria Grazia Chiuri’s creative process –  and Dior’s modern story. As for the answer, Chiuri pledges to keep searching, and through Dior’s collections, we see glimpses of resolve. 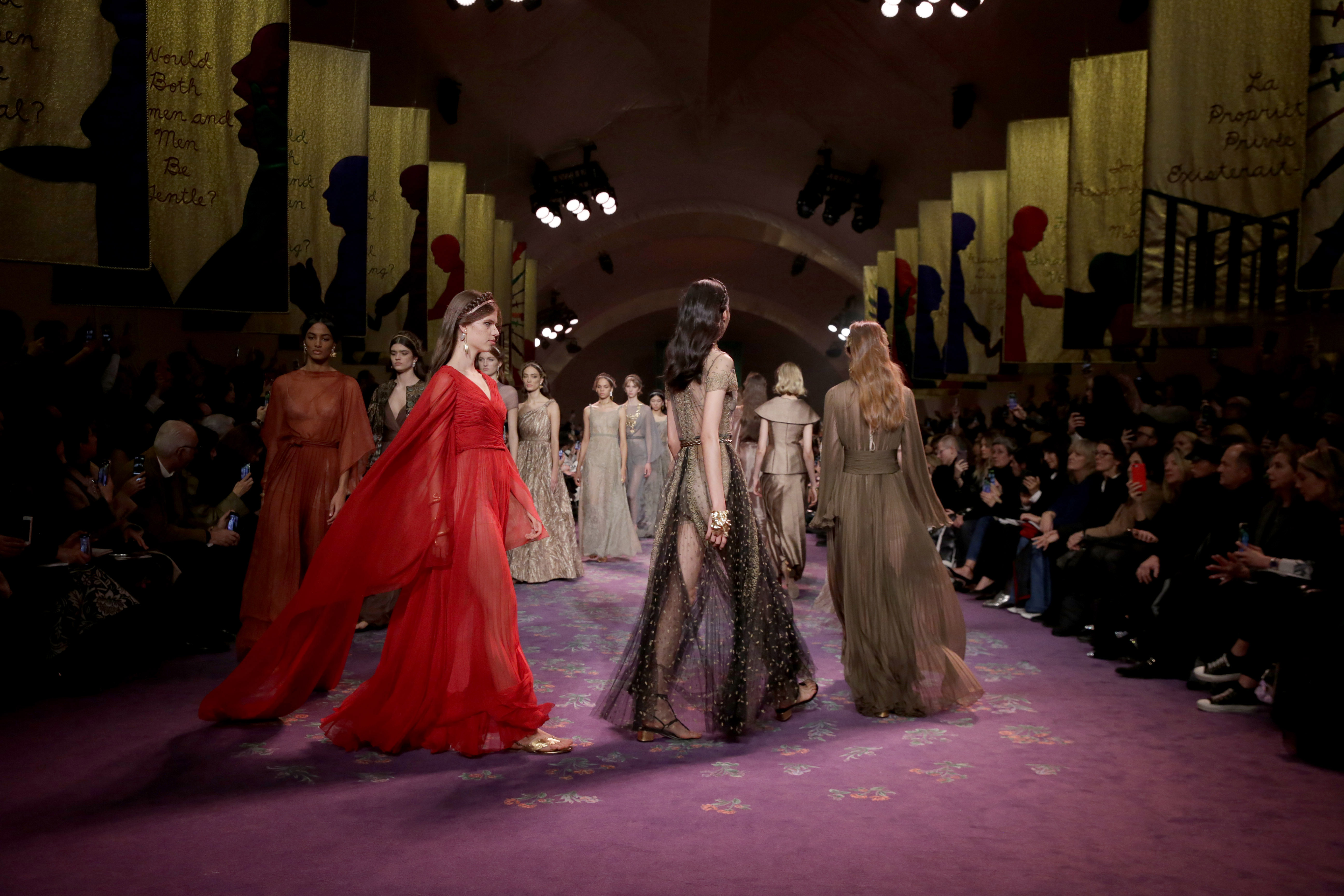 All imagery courtesy of Dior