Proven by last night's fantastical Moschino SS18 runway show. But it all started with NZ brand Deadly Ponies and this grown-up rainbow range

What would five-year-old you think of your present-day self? If you suspect your childhood entity would lament the lack of fun currently pervading life as you know it, then it might be high time to dabble in a little youth-reviving therapy. Retail therapy, that is.

New Zealand leather goods brand Deadly Ponies has collaborated with entertainment and toy franchise My Little Pony to create a world of whimsy for grown-ups that recognises the joie de vivre a great accessory can bring.

The Deadly Ponies collection, however, has been battling dull-black-bag syndrome online since its August launch and now thanks to two exclusive Deadly Ponies pop-up spaces at David Jones Sydney (Elizabeth Street) and Melbourne (Bourke Street) that fantasmagorical world of My Little Pony – Equestria – has been brought to life.

Make no mistake, this accessory collection – much like the pop-up showcasing it – has a distinctly Deadly Ponies dynamism to it. Where My Little Pony is all high-octane unmissable colour, Deadly Ponies x My Little Pony is crafted in a tonal rainbow of archival colours that strikes the balance perfectly between unabashed delightful fun and just a little bit of grown-up sensibility (the same kind of sensibility that ensures only the most premium of materials are used to fabricate designs).

For Bowden, the collaboration is “a charming reminder of simpler times and values, celebrating diversity, creativity and most importantly, friendship”.

Friendship indeed: the partnership between the two brands also marks a monumental occasion with Hasbro allowing a collaborator to create their own My Little Pony character for the first time. This Deadly Ponies creation named Shadow (yes, it’s black) can be found alongside the other core My Little Pony ponies as a Pony Puff – the signature bag charm from this capsule.

As to where you’ll find us? With the encouragement of our younger selves, we’ll be in store at the Deadly Ponies x My Little Pony David Jones pop up trying to recapture a little bit of that carefree vivacity. 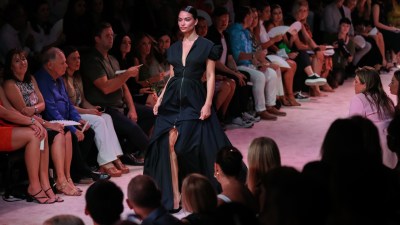