In wardrobes, homes and galleries across Australia, Greenery is taking root

As gardens of earthly delight take root in our cultural consciousness, unearth the reasons for the sudden preponderance of greenery It’s only apt that in a year where effective climate change policies have taken a beating both at home and abroad that Pantone, the global colour authority, should have named 15-0343 their colour of the year.

That life-affirming shade, dubbed Greenery, is ostensibly “a fresh and zesty yellow-green shade that evokes the first days of spring when nature’s greens revive, restore and renew”. It is, the trend forecaster promises, a salve for the wounds inflicted on the world in 2016 and a promise for a more hopeful, albeit unprecedentedly uncertain, 2017.

“Greenery bursts forth in 2017 to provide us with the hope we collectively yearn for amid a complex social and political landscape,” said Leatrice Eiseman, the executive director of the Pantone Color Institute. “Satisfying our growing desire to rejuvenate, revitalise and unite, Greenery symbolises the reconnection we seek with nature, one another and a larger purpose.”

It is, essentially, a fresh take on the increasingly common refrain that the more time we spend plugged into our increasingly LED-lit modern reality, the more we crave connection with the natural world, coupled with a desire to see ourselves within – and inseparable from – it. But before you dismiss this as another reading of colour psychology that’s both simplistic and discordant from a larger cultural context, consider the creeping proliferation of Greenery in its manifest forms edging in on our daily lives globally. Despite the seemingly insurmountable odds facing our increasingly marginalised green spaces, sprawling country gardens and urban jungles alike are seemingly encroaching unabated on our living spaces, in our major galleries, design and lifestyle choices, and sure enough in our wardrobes. The idea of the garden, it would appear, is in full bloom.

At left, a sculpture shrouded in wisteria takes pride of place in Paul Bangay’s rose garden at Stonefields; and right, a 1.5 tonne statue of Latona and her children from one of the main fountains of the Versailles Palace grounds seen in situ at The National Gallery of Australia’s Treasures from the Palace
Credit: Instagram

“In this overly busy urban world which is bombarded with too much digital interference, the country [garden] provides people with a sanctuary, a place to get away and enjoy peace and serenity” Paul Bangay, Australia’s eminent landscape architect, told GRAZIA. “Romance, informality, escapism, softness and peace [all] sum up what we get from the country.”

Bangay, who last month celebrated the release of his new book – one of several – Country Gardens, grew up next to the remnants of a large country estate in outer eastern suburbs of Melbourne. He attributes the freedom he had to roam this property with fostering a deep love of all things relating to country gardens – a love which has grown into a career now into its third decade and that culminated most recently in his latest book, which celebrates twenty of his own country gardens in Australia and around the world, including the garden at his own country estate, Stonefields, in Central Victoria.

“It had a very large garden and house as well as stables, kennels, orchard, walled vegetable garden and cow paddocks”, he recalls of the property that left an indelible impression on him. It’s a bucolic idyll that doesn’t sound too dissimilar from the Petit Trianon, informal leisure gardens at Versailles, the erstwhile seat of French power during the Ancien Regime of the late 17th century and the late 18th centuries – the treasures of which are the feature of a major show recently opened at the National Gallery of Australia.

Bangay was tasked with creating an Versailles-inspired garden at the entrance to the Gallery in occasion of Versailles: Treasures from the Palace, which is playing host to more than 130 objects almost all of which have been sourced from the Museum of Versailles itself and from the Louvre (many of which are also leaving France for the first time). Sculptures, tapestries, woodworks and furniture, including objects from the famous Hall of Mirrors and the 1.5-tonne marble Lantona Fountain sculpture from the palace’s iconic gardens, feature throughout the blockbuster exhibition, which will run until April 2017 and is sure to draw crowds befitting its world-first blockbuster status.

Asked to account for the perennial allure of the country garden and Bangay’s answer is simple: the garden itself is synonymous with freedom, and a symbol of escape from the pressures of urban living.

“They are free from overlooking dominant neighbouring houses, people [and] council restrictions which often dictate large parts of urban design, providing far more artistic freedom. Space allows a designer to think big. Space is a liberating element not found in the city.” It’s a sentiment echoed by interior stylist and photographer Kara Rosenlund, who, when asked to describe her design ethos, replies that “Everything comes back to nature. Colour palettes, textures – nature always knows best.”

Rosenlund, it seems, is in a natural alliance with the current green revolution taking over our increasingly dense urban spaces, from apartments to otherwise lifeless corporate environments which are now liberally punctuated with resilient indoor plants. Nary an interior has been styled in the past year that doesn’t include a fiddle leaf fig or a philodendron – a trend that Rosenlund predicts will continue to grow over the coming year.

“Getting back to nature,” the stylist predicts will be the year’s defining trend. “Slowing down and recharging and making room for that at home.

Whether it be through the cultivation of living walls, terrariums or a veritable hothouse worth of potted plants, the reclamation of urban interiors by nature looks to continue in earnest – and for good reason too. The effects of indoor gardens to improve self-esteem, reduce anxiety and heighten quality of life are well-documented. And despite any ostensible similarities with camouflage, those brave enough to have donned green in theory and in practice will testify to its power to make one stand out from a crowd.

After all, it is – according to the world’s most famous amphibian – not easy being green. If it were possible to discern a prevailing mood in the current state of fashion, perhaps it would be just that. If the Spring 2017 shows were any indication, it would appear that fashion once again favours the bold – a statement best embodied by the resurgence of the house of Gucci under the tenure of its incumbent creative director, Alessandro Michele.

Equal parts pure fashion fantasy and idiosyncratic expression, Michele’s collections have proven to be winning ones amongst consumers and the industry alike. The label’s singular reinvention is the living embodiment of the Pantone Greenery principle in action. Since taking the helm alongside chief executive Marco Bizzarri, Gucci has enjoyed consecutive increases in sales growth, defying the trend toward slowing growth in profits in the luxury goods market.

Michele’s collections have clearly struck a cord with consumers evidently hungry not only for a ready-to-wear offering that’s the antithesis of anonymity but a retail and consumer experience greatly divergent from what’s currently available both in stores and online – an offering that extends beyond commerce into creativity, pulling into its orbit a coterie of likeminded artists with an affinity for nurturing new ideas, and being nurtured in return. Case in point, the Gucci Garden capsule collection – an online exclusive offering that extrapolates on Michele’s signature Edenic prints across apparel, footwear and accessories.

“I have a deep interest toward nature, a passion which I guess can be seen through my collections,” said Michele. “I have a sort of an animist soul.”

Perhaps Kermit really did have it wrong all along. Being green has never been more enviable. 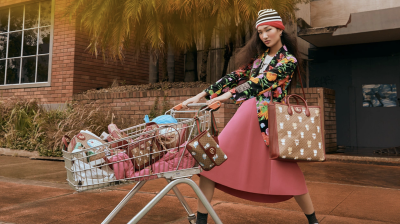