Earlier this month, 20-year-old Presley Gerber, the son of Cindy Crawford and Rande Gerber, debuted a new tattoo on his face: the word ‘Misunderstood,’ which was done by celebrity tattoo artist Jon Boy.

At the time, neither Cindy, Rande nor Presley’s younger sister Kaia Gerber commented on the tattoo, however, the famous family is reportedly concerned behind closed doors. A source told E! News, “Cindy and Rande are definitely concerned about their son. They truly want to make sure he is okay,” adding that Cindy and Randy have “been trying to get Presley help since his DUI last year.”

“He has just fallen off the beaten path. He has been in treatment before but they are pushing for something more serious,” they shared “They want to make sure he’s in a good mental state and are closely watching him.”

Meanwhile, Kaia, who is currently in Milan for fashion week, has been trying to take her brother “under her wing” and look out for him.

Five days after debuting his new tattoo, Gerber hit back at critics writing on Instagram, “Innocent little me before all the horrid tattoos. Y’all know nothing #waketfup.”

“If I thought this was going to ruin my face or I didn’t want this, I wouldn’t have done it,” he continued. 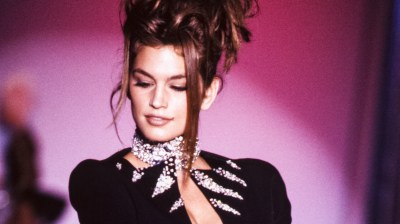