On Paris Fashion Week's final day, Chanel held a paired back show filled with tributes to its founder and former creative director

PARIS, France – The Chanel show is always one of, if not the, most highly anticipated event of the fashion month calendar, set on the final day of a month-long journey across New York, London, Milan and Paris. But after a coronavirus outbreak in Italy prompted designers to cancel their shows on the final few days of Milan Fashion Week, no one knew whether the French equivalent would reach its end unscathed. 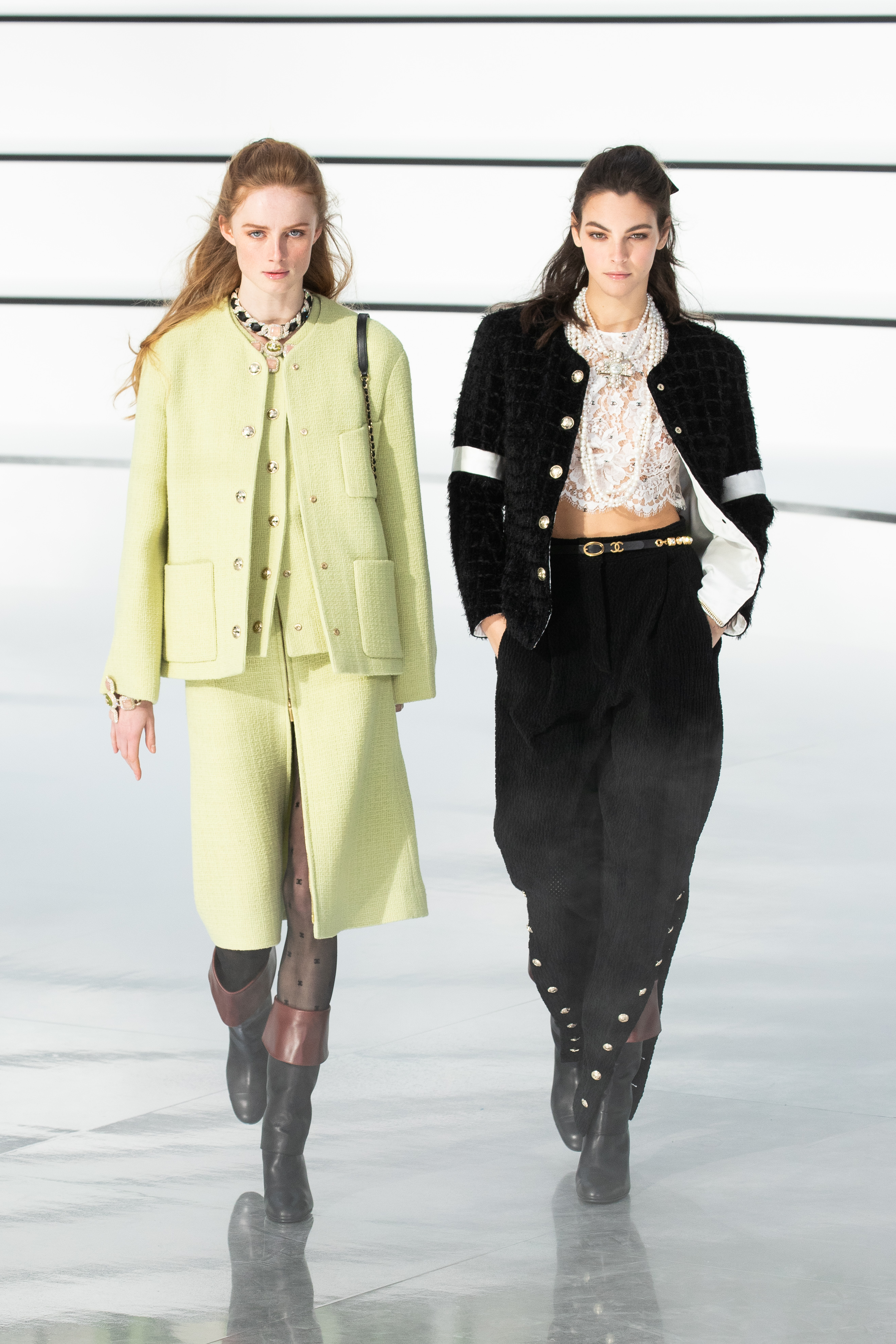 PARIS, FRANCE – MARCH 03: (EDITORIAL USE ONLY) Models walk the runway during the Chanel show as part of the Paris Fashion Week Womenswear Fall/Winter 2020/2021 on March 3, 2020 in Paris, France. (Photo by Victor Boyko/Getty Images)

Though the city put a ban on gatherings of over 5,000 people on Sunday, by Tuesday morning the sun was shining and guests were arriving to the Grand Palais, the go-to venue of Chanel every season for its Fall 2020 Paris Fashion Week show.

Ahead of the day, attendees were warned of strict security measures and advised to arrive an hour before the show with not only their hard-copy invite, but a digital registration and ID on hand. The extra ticket and bag checks no doubt thanks to French YouTube comedian Marie Benoliel, who crashed the runway last season and came face to face with an angry Gigi Hadid, who quickly escorted her off the runway with force.

The late Karl Lagerfeld, Chanel’s creative director until his death in February 2019, was known for his extravagant sets, transforming the Grand Palais into a beach, space station and casino. His successor, Virginie Viard, is taking a different approach. Guests walked into the historic venue to find Chanel white tiered benches set around a mirrored runway with smoke pouring out from beneath the floor: beautiful yet minimal.

Rianne Van Rompaey and Vittoria Ceretti opened the show, walking arm in arm and chatting between themselves, wearing tights and tweed suits and debuting a new Chanel style of boot – the only footwear worn in the show, a tribute to Lagerfeld which were inspired by a photograph of the designer wearing riding boots.

This season, models hair and beauty looks were minimal – half-up, half-down with bows at the back and dewy faces – to make room for the accessories. Pearls, crucifixes and costume jewellery piled onto the necks of almost every model, save for Kaia Gerber who wore one of the most paired back, beautiful looks of the collection: an off-the-shoulder black gown with balloon sleeves and a colourful belt – the same design on many jumpers, necklaces and long-sleeve tops – around her waist.

Paying homage to the brand’s founder, Gabrielle “Coco” Chanel, Viard sent models down the runway in equestrian-themed attire, such as velvet jockey caps, riding boots and side-buttoned jodhpurs. It doesn’t seem like a coincidence that Coco’s own horse was named Romantica and Viard deemed romanticism a theme of the collection, something evident in the ruffle-fronted blouses and lace bodices showcased on the runway.

The most photographed and Instagrammed moment of the show came when Gigi Hadid walked flanked by Mona Tougaard and Hyunji Shin, before Lagerfeld’s former muse closed the show solo – thankfully, no gatecrasher in sight.