We need a collective vote here: Are they ever OK?

NEW YORK CITY: It’s getting colder in New York at the moment. While the warm sunshine is still beaming during the day, the crisp night air has a real bite to it. Americans love this particular change of season as it means “sweater weather” and while I – an Australian – am sadly gripping to a mini skirt and simultaneously bracing for the inevitable chill, New Yorkers are roaming uptown in their most practical cold-weather kit.

Exhibit A: Camila Cabello. The sultry little singer made her Saturday Night Live debut last night as a musical guest, accompanying first-time host David Harbour of Stranger Things. And she was excellent. Take a listen to her performing her new tracks “Easy” and “Cry For Me”, both October singles from her highly-anticipated sophomore album, Romance, expected to drop later this year.

But between leaving the SNL set at NBC’s Studios at 30 Rockefeller and arriving at the show’s after-party on the Upper West Side, Cabello had changed and was photographed in a black blazer dress and nude, opaque stockings with fishnets, possibly from her performance. “Rancid”, “Not acceptable” and “Reminds me of high school” are just a few comments a couple of my girlfriends threw out about the nude tights over drinks – all three of whom were dressed in sheer black, patterned stockings. A couple of questions arose: At what point during such a cold snap do we surrender to the unfashionable, even with the knowledge there are other options out there? Are nude stockings only reserved for royalty? Is it actually ever OK to wear them? And if so, what type of event?

Jennifer Lopez – who was busy filming her new movie Marry Me with Owen Wilson across town in Red Hook – also had freezing legs. See her solution here.

We invite Cabello is take a leaf out of model Blanca Padilla’s book of Dressing For The Cooler Months. The Spanish model and former face of Dolce & Gabbana and Givenchy Beauty put on a show last week for Italian legwear label Calzedonia. The memo: Sheer Black – and where you can, make it patterned. 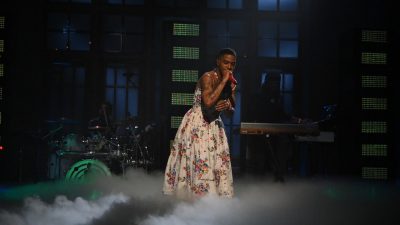