There is “always a healthy fear” to the commissions that Boyarde Messenger’s clients charge her with. The British artist does not paint on canvas, linen, board or any other number of material surfaces that allow a margin to correct her course in the event of a misplaced stroke, however small. No such allowances exist for the mononymic Boyarde, who specializes in reappropriating iconography from Pop Art and pop culture to create bespoke, hand-painted illustrations, which she paints directly onto the variegated surfaces of luxury accessories. Boyarde acknowledges that while there is a huge risk in the canvas of her choosing (or lack thereof), there is also a great deal of trust – without both, one imagines there would be no sense of reward for either party. The stakes, like the goods themselves, err toward being on the high end of things.

“The positive aspect of Pop Art imagery is that it is procreation art,” Boyarde tells GRAZIA, accounting for the reasoning behind her whimsical, chosen subject matter. “Meaning that the imagery plays on an existing narrative, allowing for clients to immediately relate to what has been created. It brings a memory to the viewer, so they feel they know it already.”

Favourite amongst those high-stakes commissions? A rendering of “Iron Man on an alligator Birkin”, says Boyarde, who says that she is known as “the Queen of Hermès” given the frequency with which she is supposedly given the coveted Hermès Birkin on which to ply her trade. “The key to painting on unconventional canvases is understanding the nature of canvas you are painting on, and using the right mediums,” says Boyarde. “My work is all about quality and longevity. It doesn’t matter if I am painting a Birkin or a body, I must understand the canvas I am dealing with.”

Paper never held the same fascination for Boyarde as it did, or does, her peers. The artist studied photography at Bournemouth, a resort town on the south coast of England in Dorset, before beginning a practice in earnest while training as a painter’s assistant. A five-year stint in Belize introduced her to both mural-style works and a fascination with the body as a canvas. It is a passion for the unexpected that continues to date. “I became fascinated by painting the female body,” says Boyarde, who describes herself as the artist without a canvas. She is fixated on “breaking down negative stigmas attached to female form and nudity, finding a way that the canvas I worked on could have a narrative.”

The artist’s own narrative took its most significant turn when, in 2012, she opted to use 100 pairs of vertiginous shoes by the British designer Charlotte Olympia as the canvas for a work exhibited at the gargantuan Art Basel Miami art fair – a feat that she says helped to propel her from selling limited edition prints in the gallery world to courting the attention of fashion world and its dedicated following intent on customizing their recent purchases.

Most recently, Boyarde unveiled what she calls her first ‘city collection’ in Sydney at the invitation of T Galleria by DFS, the retailer on whose luxury goods the artist applied her signature painterly treatment. “For the speech bubbles, I took existing narratives of iconic phrases and mashed them up with fun Aussie slang,” she says of her offering. “We spent days doing Aussie research, asking Aussie friends if we weren’t going over board or cliché.” On one piece, a black leather, googly-eyed Anya Hindmarch clutch, the artist painted two jars of Vegemite, accompanied by a speech bubble advising you “Keep your friends close and your Vegemite closer!!” (It’s her favourite). On an oxblood Burberry bag, a leopard reclines under an arc of stars; a second red bag features the likeness of Audrey Hepburn in her guise as Holly Golightly from the film adaptation of Breakfast at Tiffany’s. “We’ll always have Sydney”, she is seen to be saying, invoking Humphrey Bogart’s famous parting line from Casablanca. It’s a malapropism of the kind that you would imagine Boyarde takes an inordinate amount of pleasure in – the willful inversion of high and low; the subversion of image and text; and the importance of surface being historic tropes of the Pop Art genre. “The downside of ‘pop art’ imagery is that when using existing images, there is a risk of losing your identify as an artist if not careful, as you are painting something so familiar,” Boyarde says, citing one of the pitfalls of her chosen subject matter.

Through her paintings, Boyarde says that she aims to invest as much in her patron’s empowerment as they have in their material goods. “It is always my main goal to bring out a woman’s inner goddess,” she says. What could be more ‘pop’ than that? 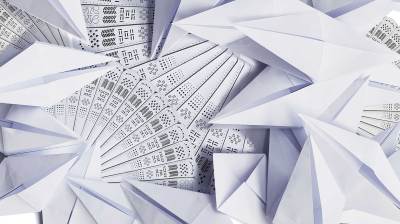