In a new interview, Billie Eilish has opened up about her “horrible” relationship with her body, revealing that it was the reason she used to self-harm herself when she was younger and admitting that in a bid to lose weight, she took diet pills when she was just 12-years-old.

The 19-year-old singer, who has won five Grammy’s in the past year, has become synonymous with her signature style, nearly always opting for baggy, oversized clothes, whether she’s on stage or on the red carpet. But Eilish’s reason for wearing baggy clothing isn’t just because she prefers the style, it’s because after years of struggling with her body image, she decided to cover her figure up so that people can’t “judge her body”.

However, Eilish’s plan backfired a bit: because people had never seen her body properly before, last year when photographs of her dressed in a tight tank top and shorts while walking near her home in LA were shared online, it prompted a huge and unnecessary conversation about her body.

Speaking to Vanity Fair for its new cover story, which was photographed by Quil Lemons – the youngest person to ever shoot the magazine’s cover – and styled by Gabriella Karefa-Johnson, Eilish opened up about the traumatic experience, saying, “I think that the people around me were more worried about it than I was, because the reason I used to cut myself was because of my body. To be quite honest with you, I only started wearing baggy clothes because of my body.”

Thankfully, Eilish is now in a healthier mindset and can cope much better with comments about her body now, compared to when she was younger. “I was really, really glad though, mainly, that I’m in this place in my life, because if that had happened three years ago, when I was in the midst of my horrible body relationship — or dancing a ton, five years ago, I wasn’t really eating. I was, like, starving myself,” she said.

“I remember taking a pill that told me that it would make me lose weight and it only made me pee the bed — when I was 12. It’s just crazy.”

Eilish admitted that she never thought her body would be the subject of such a massive conversation online, saying, “I thought that I would be the only one dealing with my hatred for my body, but I guess the internet also hates my body,” she added. “So that’s great.” 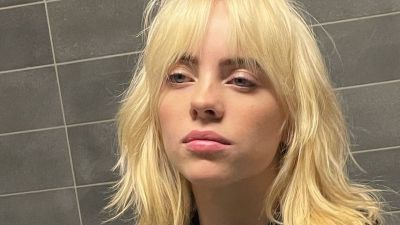