Karlie, Kendall and Gigi are already fans and now A-listers at the world’s biggest swim fashion week are too

It’s been a short road from niche to knock-out for little Australian swimwear label duskii, but the neoprene-based brand that’s been worn by everyone from Gigi Hadid to Kate Upton just showed the fashion world it’s set for giant status.

As the only Australian label to show at Miami Fashion Week 2017 – the swimwear world’s equivalent of Paris Couture Week – it’s now enjoying its own time in the spotlight. Little doubt, duskii’s signature neoprene fabric, which is masterfully cut so as to marry fashion and function, has carved out an all-important niche in the crowded swimwear and athleisure market.

And with the likes of Karlie Kloss, Kendall Jenner, Gigi Hadid, Kate Upton and Elyse Taylor having zipped into their own duskii suits over recent times, the brand’s profile has been on an unstoppable upward trajectory.

This most recent excursion across the pond to Miami, where global swim and fashion influencers and ambassadors all convened, is no doubt the beginning of duskii’s expansion into the global consciousness.

It’s been a busy season for founder Patreece Botheras, who harks from Sydney’s Northern Beaches: the brand recently launched a diffusion line called duskii GIRL, a junior collection that taps the same signature silhouettes and seasonal prints from the adult collection, replicated into a child and teen-friendly rendition. 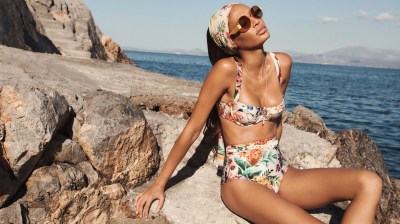