Chanel Shouts French From The Rooftops In Paris

In her first ready-to-wear collection since Karl Lagerfeld's passing, Virginie Viard makes a beautiful proposition for the French Girl we all want to be

It is difficult to describe the buzz before a Chanel show. Indeed, in the context of Fashion Week, and more specifically Paris Fashion Week, where grandeur and glory is all but normal, Chanel continues to rank the most magnificent of them all. The running waterfalls, the to-scale cruise ships, even the rocket ships; elaborate productions which the late Karl Lagerfeld summoned of Chanel and which the House willingly – and spectacularly – obliged. Anything and everything was achievable within thy hallowed walls of the Grand Palais, and in this way, Chanel became the big ticket show of Fashion Month. 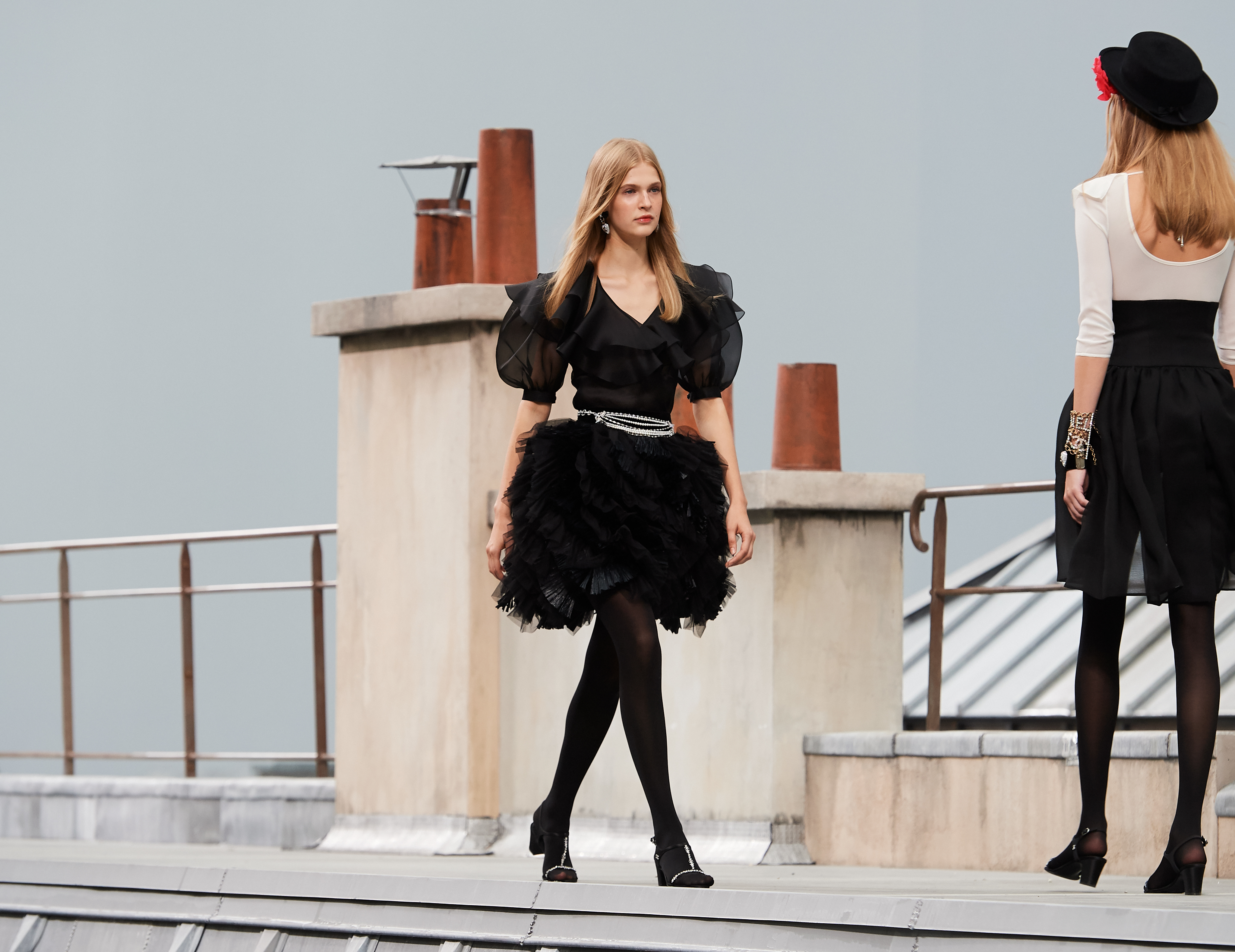 This season, there was no Karl. I was attending my first Chanel show in Paris, and despite an immense feeling a sadness in not witnessing his work in the flesh, nothing could diminish my excitement. Not even the heavy pelts of rain that would beat down on my perfect David Mallet coif, swelling it to a mound of very un-Chanel-like frizz. The traffic, again, was terrible. With a spy on the inside (or rather a very punctual peer who actually factored in fashion week’s traffic problem as oppose to my frustratingly laissez-faire approach – had I not learned my lesson? No.), I was being fed live updates from within. It’s OK, it hasn’t started. It’s OK. It’s OK. It’s OK…OK, now run. I bolted upright in the back of my Uber, grabbed my foolish minaudière and ran. I ran for my dear life – or Coco Chanel’s life – soggy blow-wave in flight. I was not going to miss Chanel.

As the mighty grey cloud amassed on the Parisian horizon with imposing brutality, I was battling some other problems on the ground. Paris’ lovely cobblestones, for one, do not make for easy running, particularly in spindly kitten keels. A lack of hardcopy invite also proves onerous when there are at least five checkpoints which all require it. But alas, where there is a will (to see Chanel), there is a way, and via panicked flashes of my email invite and a few je suis désolés I was in. Not the way I was hoping to arrive at Chanel, but in regardless.

Everything in Paris is supersized. It is towering and lofty and majestic. But stepping inside the Grand Palais was something entirely different. It was everything I imagined and more, its sheer size, its vast open ceiling indescribable. Parisian rooftops lined the nave of the hall in greyscale. With their zinc surfaces, intimate walkways, terracotta chimney pots and windows opening onto the sky, it was as if the skyline of the Rue Cambon had been transported inside the Palais. “The roofs of Paris remind me of the atmosphere of the Nouvelle Vague,” mused Virginie Viard, the French New Wave cinema of the 1950s and 1960s and the nonchalant, neat grace of its heroines her inspiration. “I saw silhouettes walking on the roofs. I thought about Kristen Stewart playing Jean Seberg and all the actresses Gabrielle Chanel dressed at that time.” In her short tenure, Viard has ushered in an understated elegance at Chanel. Even today’s set, despite its consummate construction, felt subdued, but in a beautiful way. It felt so very French, so very simple, yet so precise. Not a beat was missed, down to the rather banal warning signs. DANGER! Mort!, an ugly electricity box read. In this way, the Chanel fantasy lived on, power boxes and all. It’s clear that Viard favours introspection. Not so much of her own, she is fiercely private and elusive, rather of the House and of its native France. As the models walked out to spirited chanson, fresh-cheeked and lolly-lipped, they all looked like young, pretty, well-bred French girls. Instead of stuffy silhouette, they wore mini skirts and shorts, the famous tweed suits refashioned with abbreviated hemlines. There were denim jackets and capri pants, flared skirts and flounced collars and cuffs, and delicate pleated blouses with balloon sleeves embellished with little bows or raffia and organza petals. Even the iconic straight-cut masculine tweed jacket was tweaked with a playful verve, refashioned into playsuits, jumpsuits and little dresses with kick-hems. It was a collection of youthfulness, not refractory or rebellious, however, but the chic jeune-fille version. The kind of French girls we foreigners dream to be.

Perhaps most indicative of this youthfulness was the fabrications; flouncy, feminine and supple, Viard’s intention was not to impede movement, rather encourage it. Let les filles play. And in satin, silk faille, taffeta and organza play they did. In this transparency, they revealed the breathtaking work of the ateliers required for the construction of the dresses and their handkerchief hems. The more formal side of proceedings articulated tiers of printed chiffon, organza, feathers and raffia fringes on delicate tops and longer skirts, the girls had grown up – if only for a night. 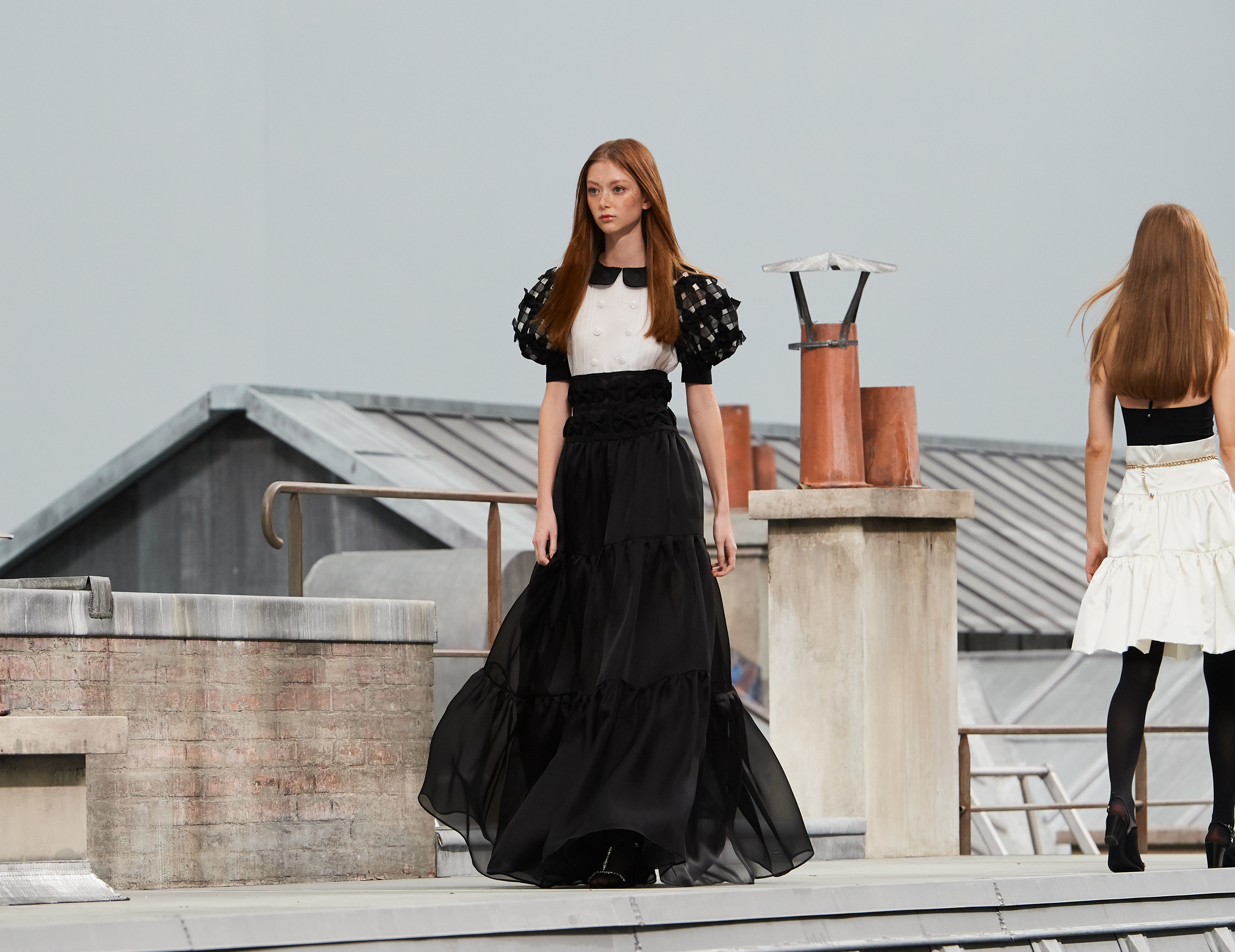 There was also a spectacular display of colour and graphic print. Flashes of neon, bold stripes, vibrant block colours; orange, pink, blue and the red of a Chanel lipstick – most likely Pirate – illuminated the House’s emblematic white and black. Dresses in anthracite chiffon were printed with Parisian façades, their flat pleats seemed ready to float away into the sky. Not one for overt branding, one particular print was ultra-graphic in its articulation; the letters of CHANEL haphazardly shouting from the rooftops with unexpected flair. 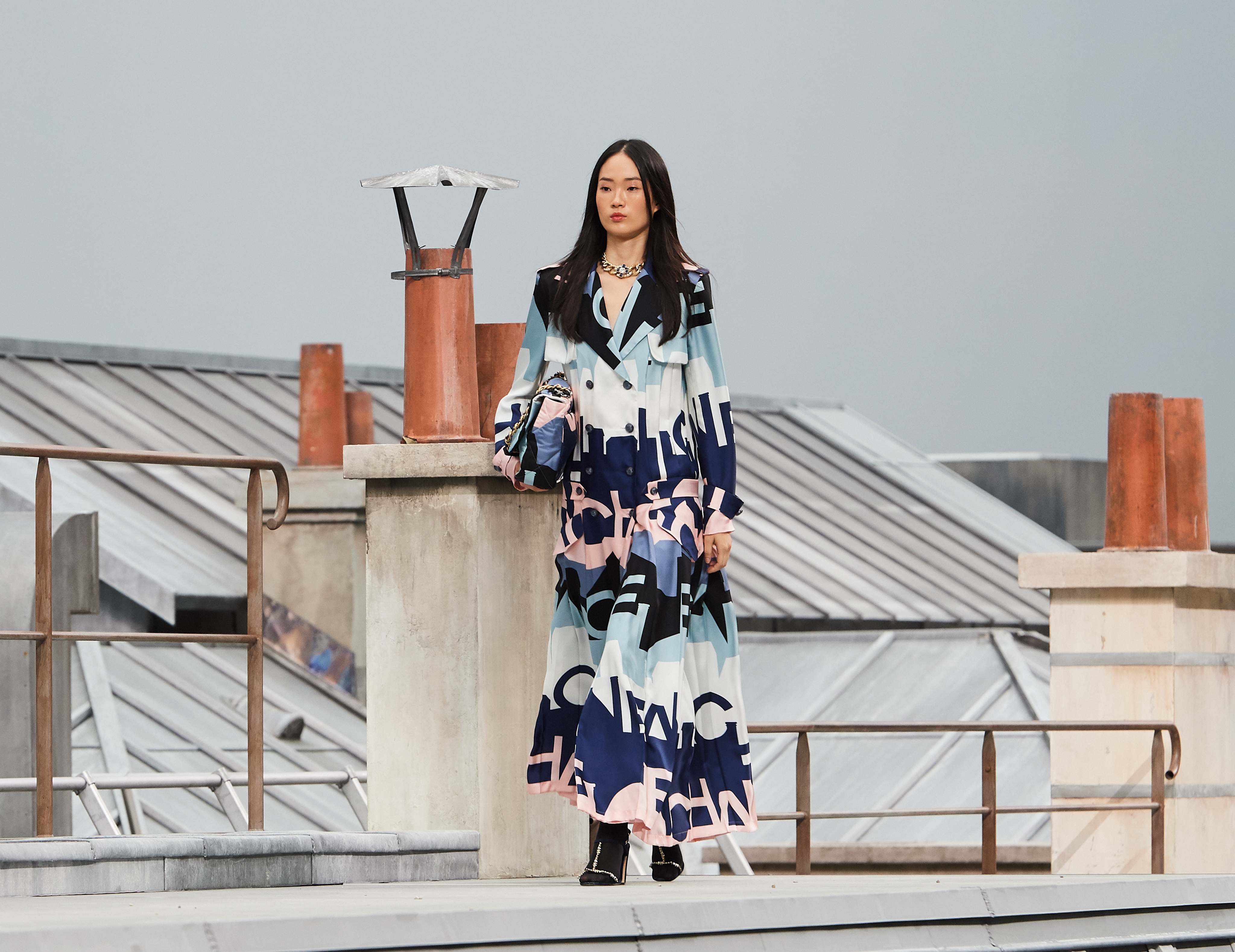 As for the accessories, Chanel’s commercial baguette-and-butter, the iconic bags of old were refreshed for this new fille. The large Chanel 19 bag came swathed in printed silk twill, while the 11.12 bag was back in tweed to match its suit. Zip-up bags in leather or tweed were reminiscent of schoolgirls’ pencil cases; a scribbly Chanel signature appeared to have been handwritten. Cute bowler hats were paired with signature flats, bulbous organza corsages adorned twin-sets and pearl sautoirs and brooches were layered.

As the girls walked single file, seemingly in unison, I had tingles. So this is what a Chanel show feels like. Even with its decidedly stripped back mood and bouclé-clad gatecrasher – it was magic. Even if she prefers to whisper it from the rooftop as oppose to shout, Viard’s vision for Chanel is a wonderful one – and one that looks much brighter than the bleak Parisian skyline that day in the Grand Palais. Just Another Reason Why We Love Selena Gomez
Next page