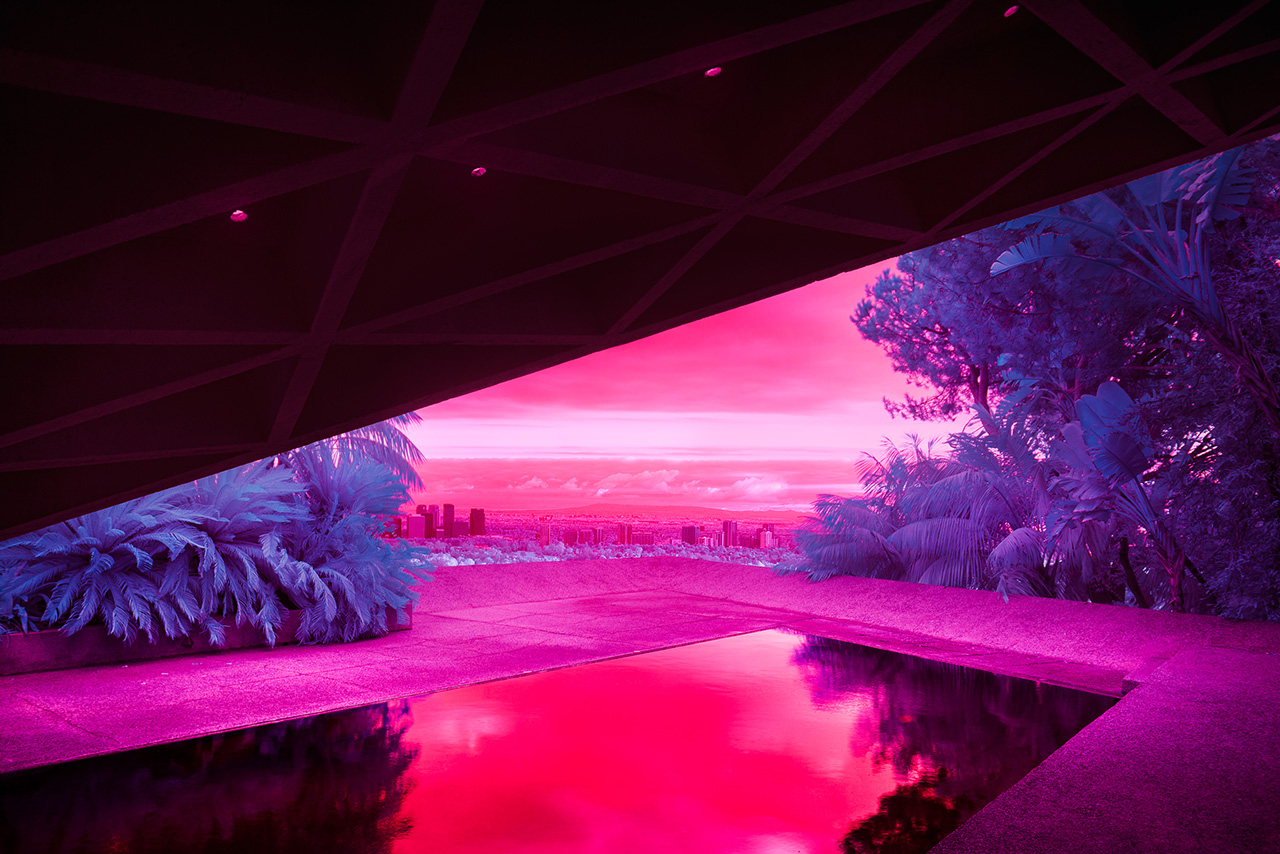 Excerpts from Infra Realism, a book documenting the infrared photography of Kate Ballis 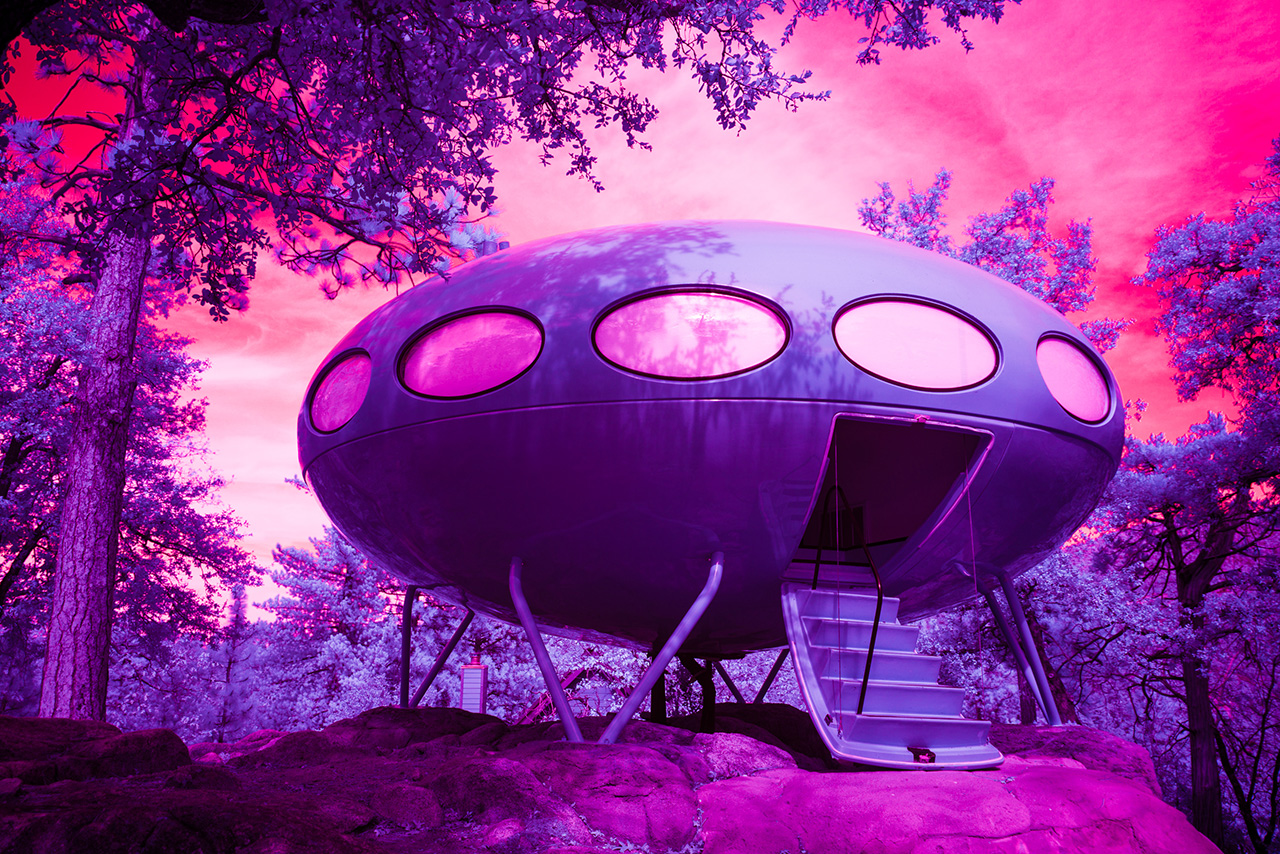 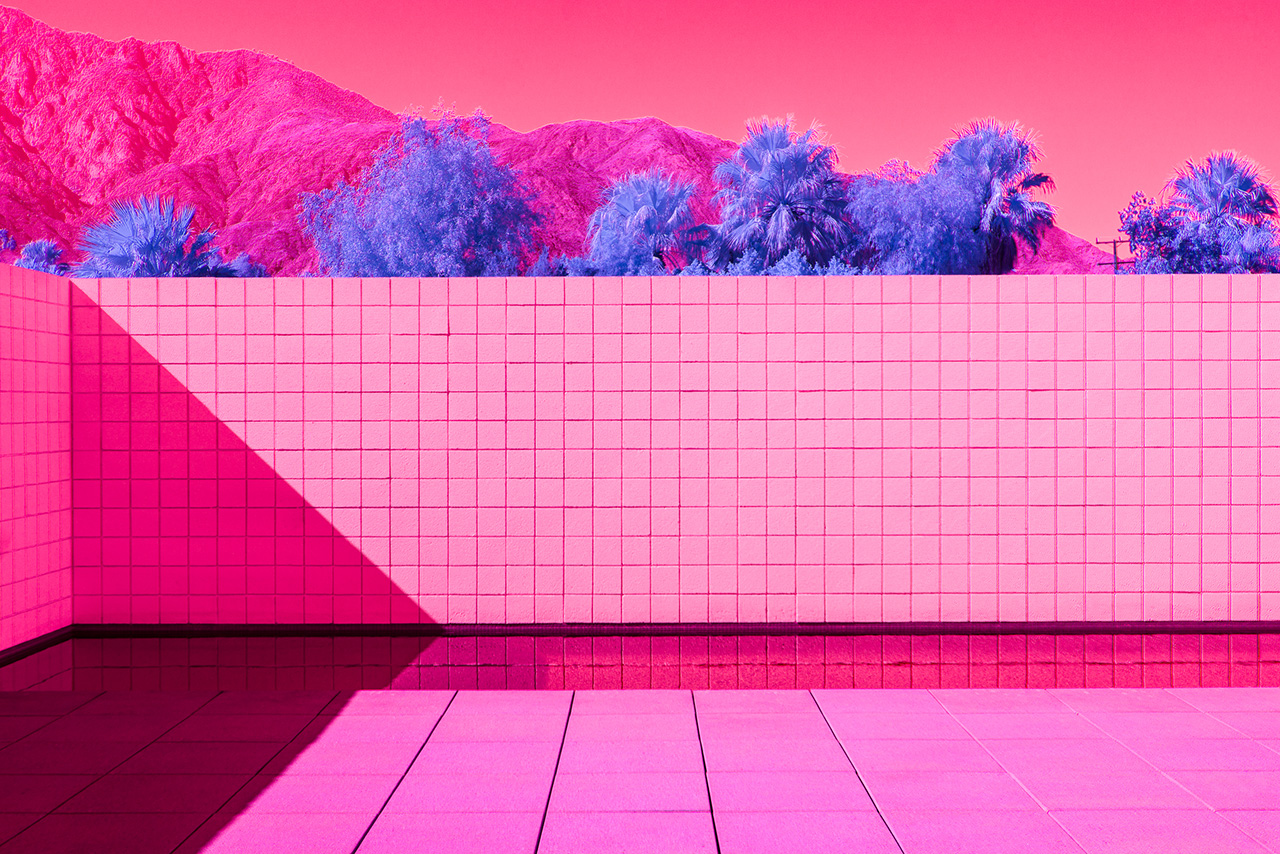 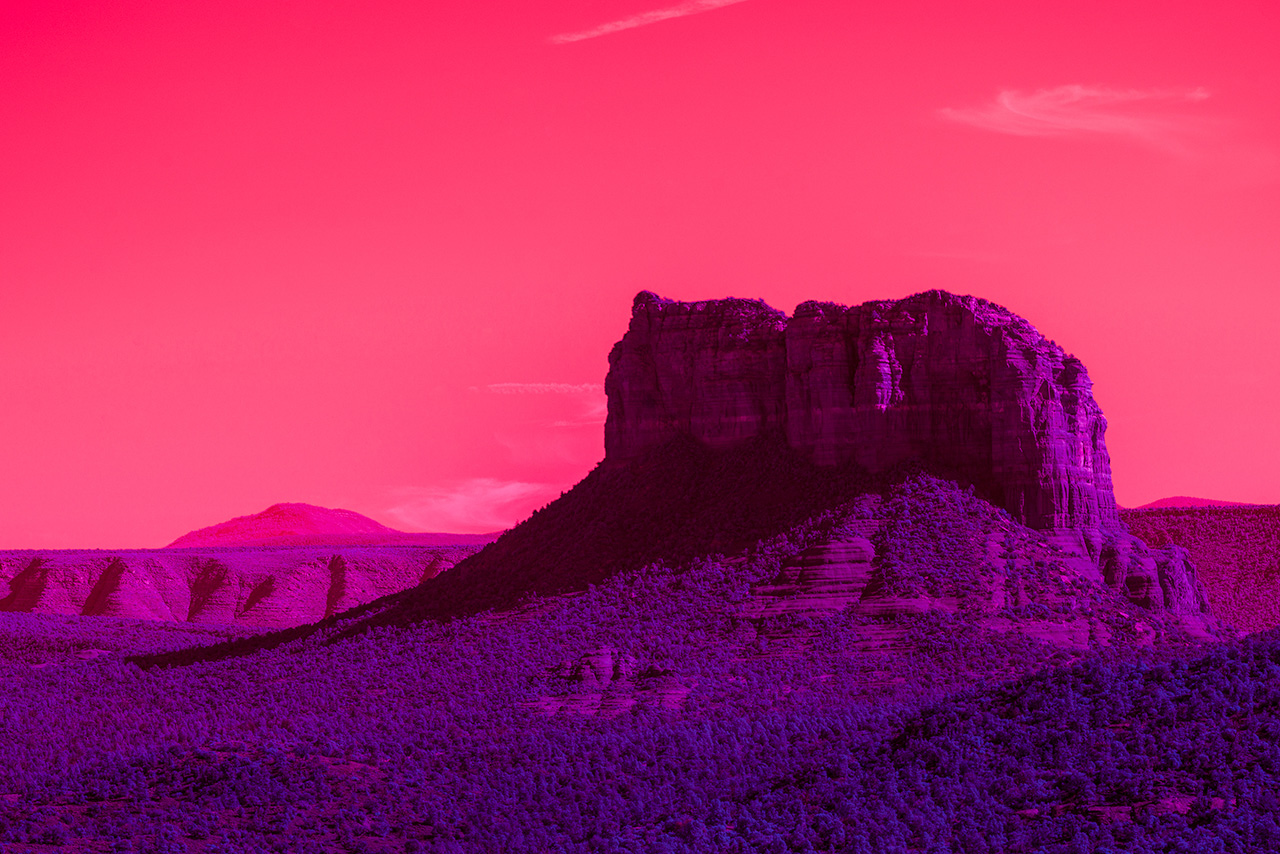 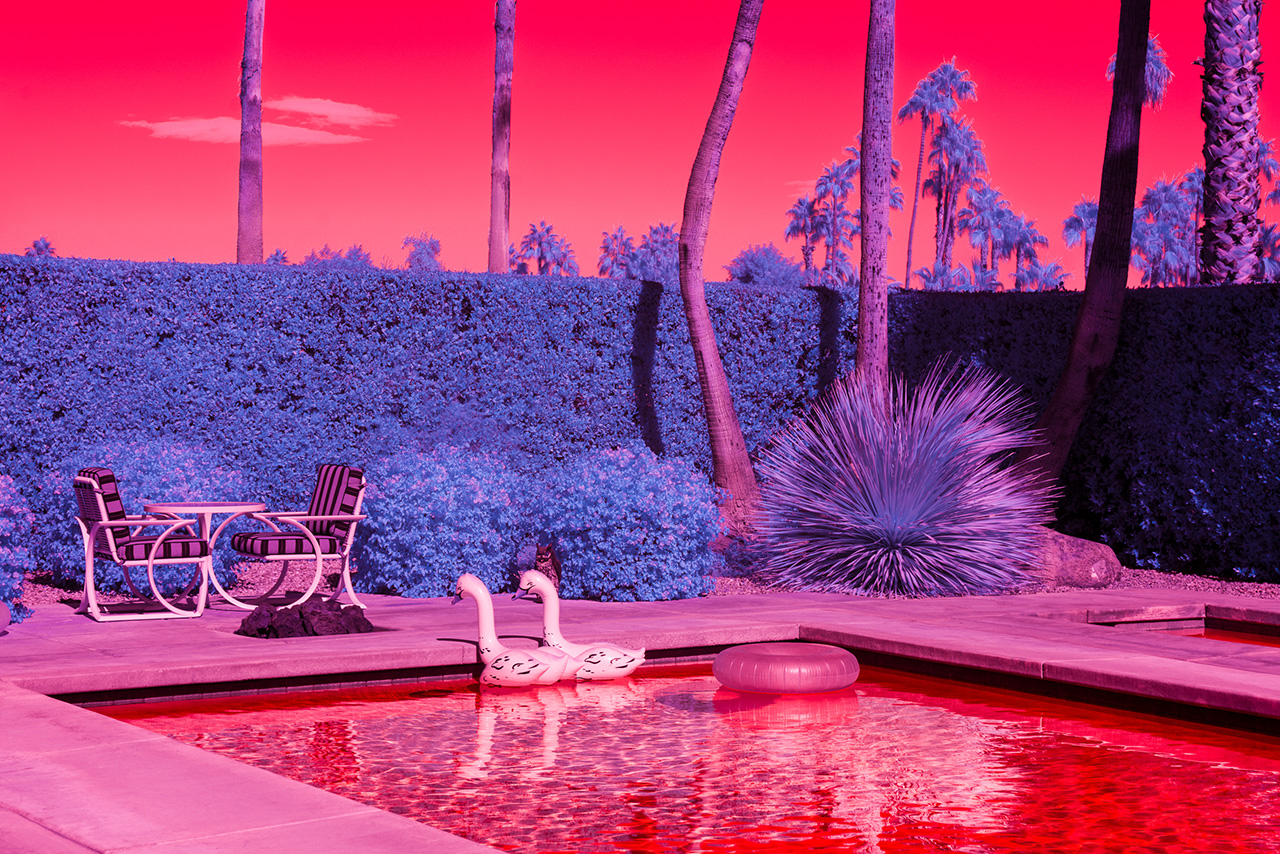 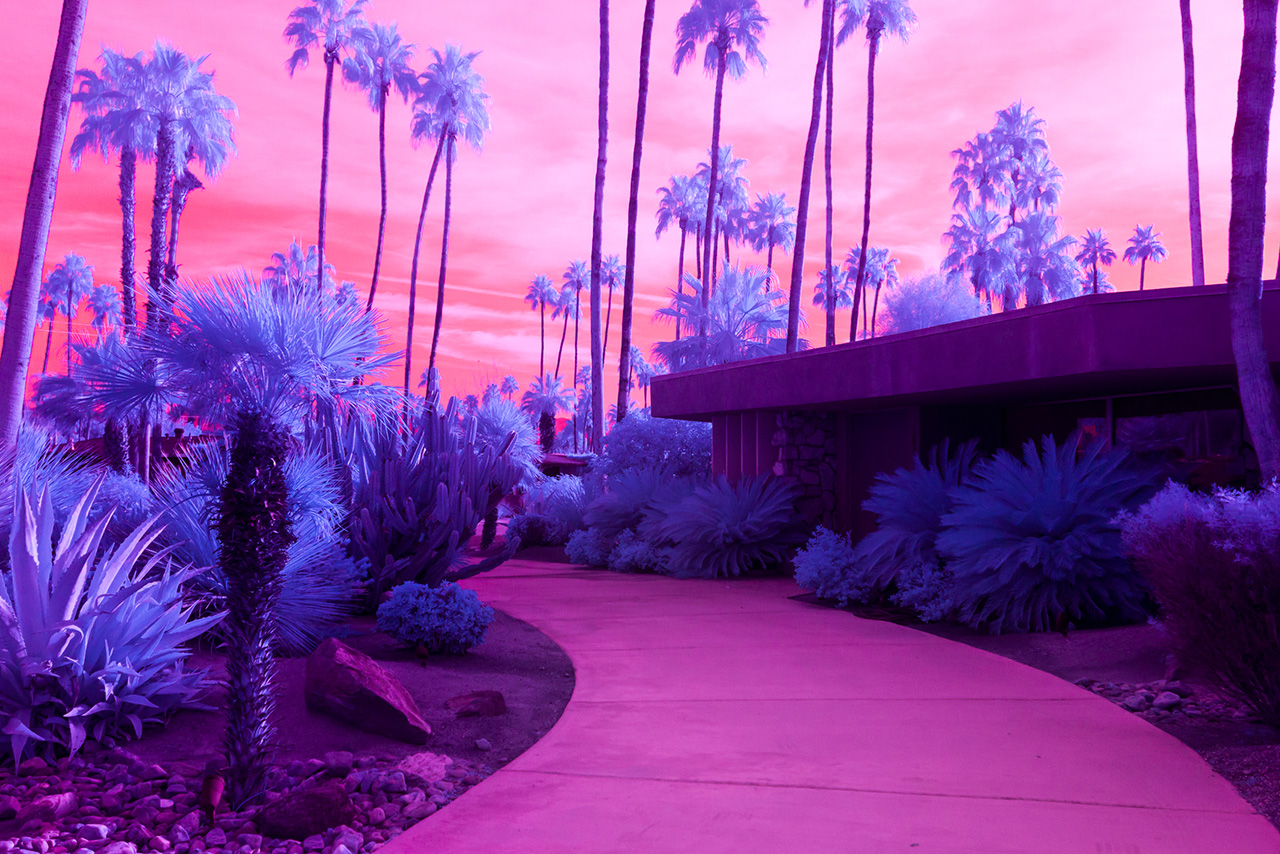 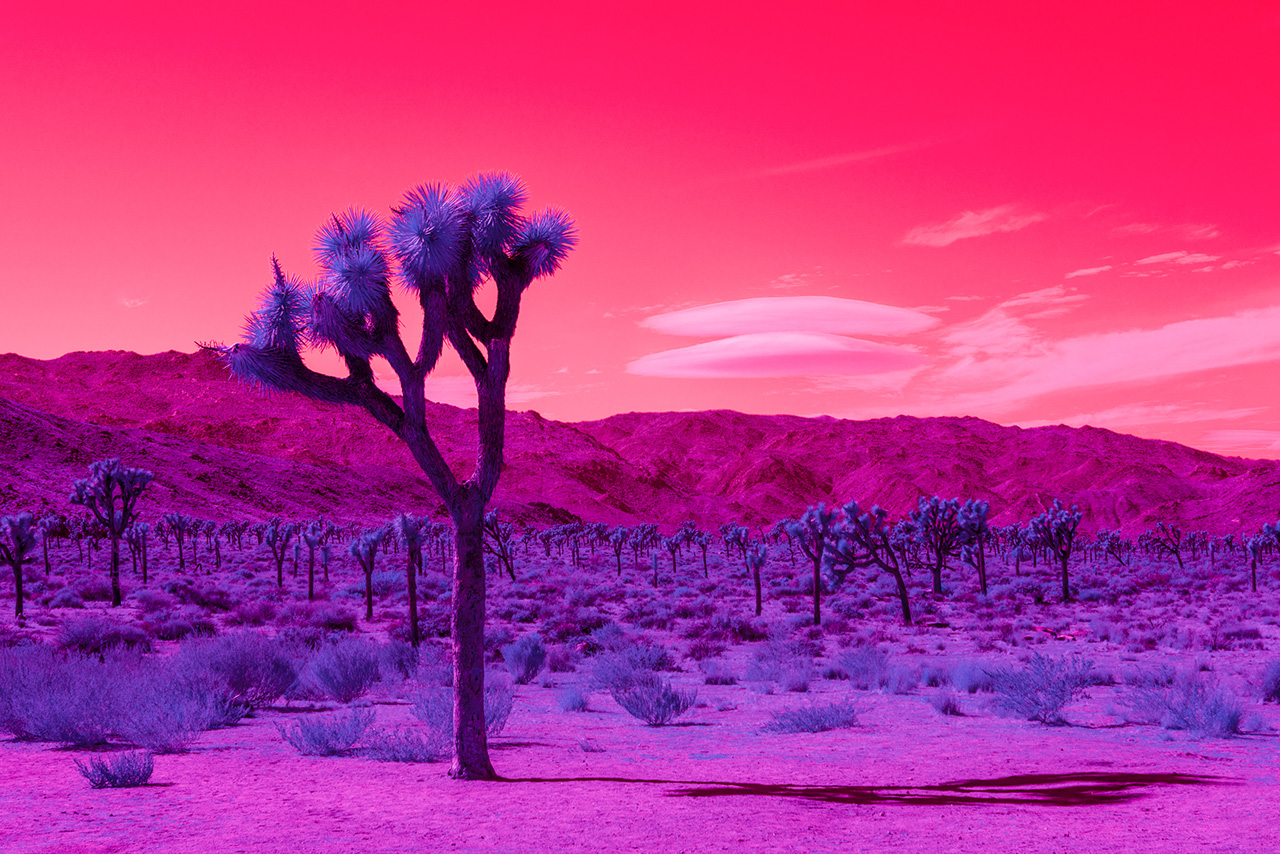 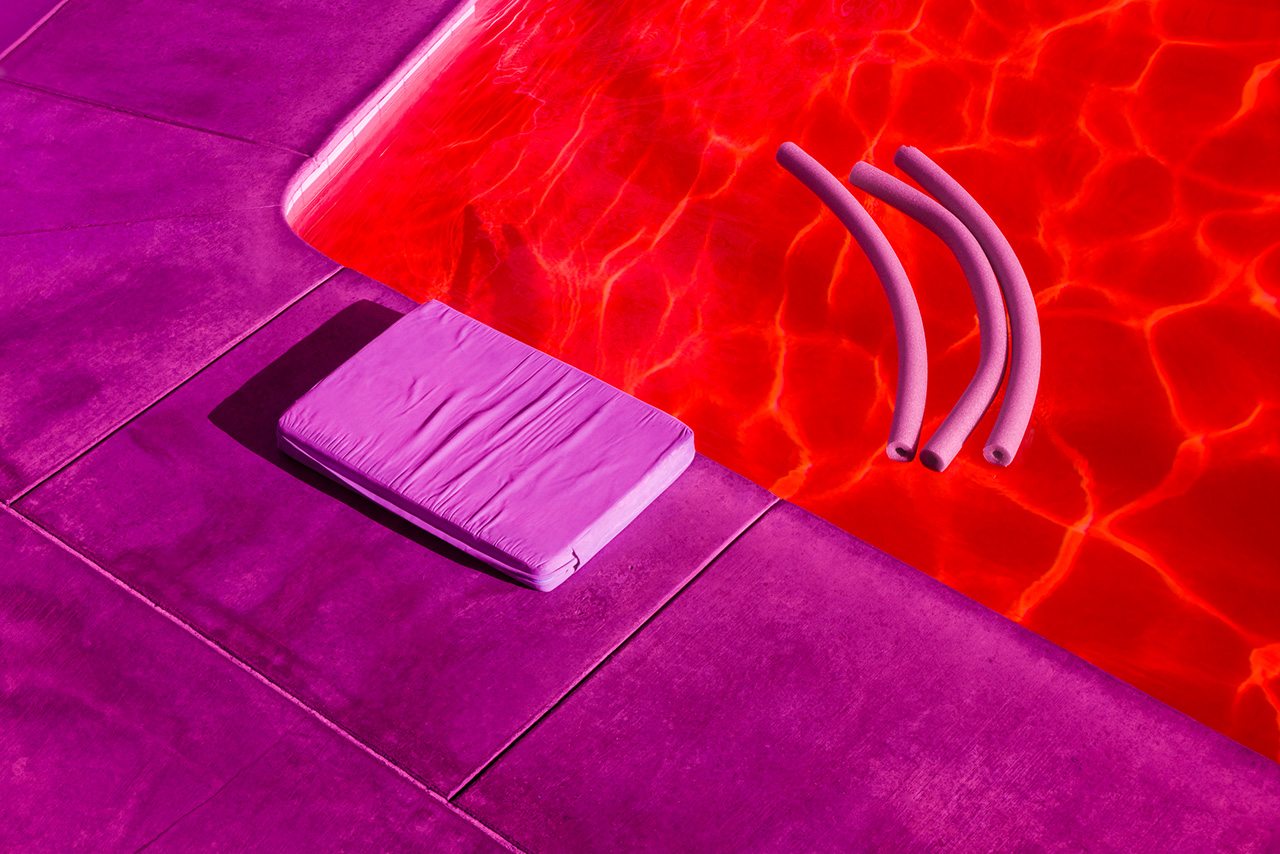 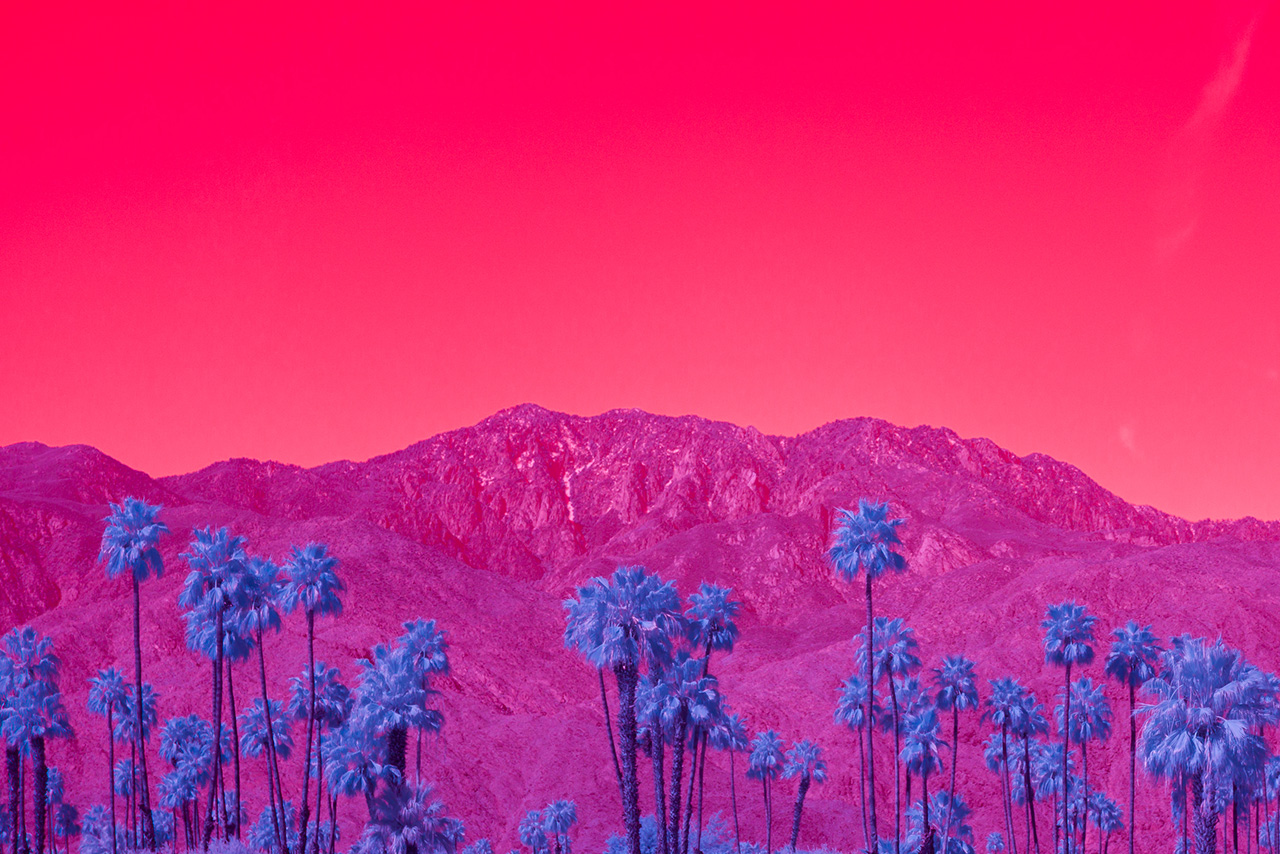 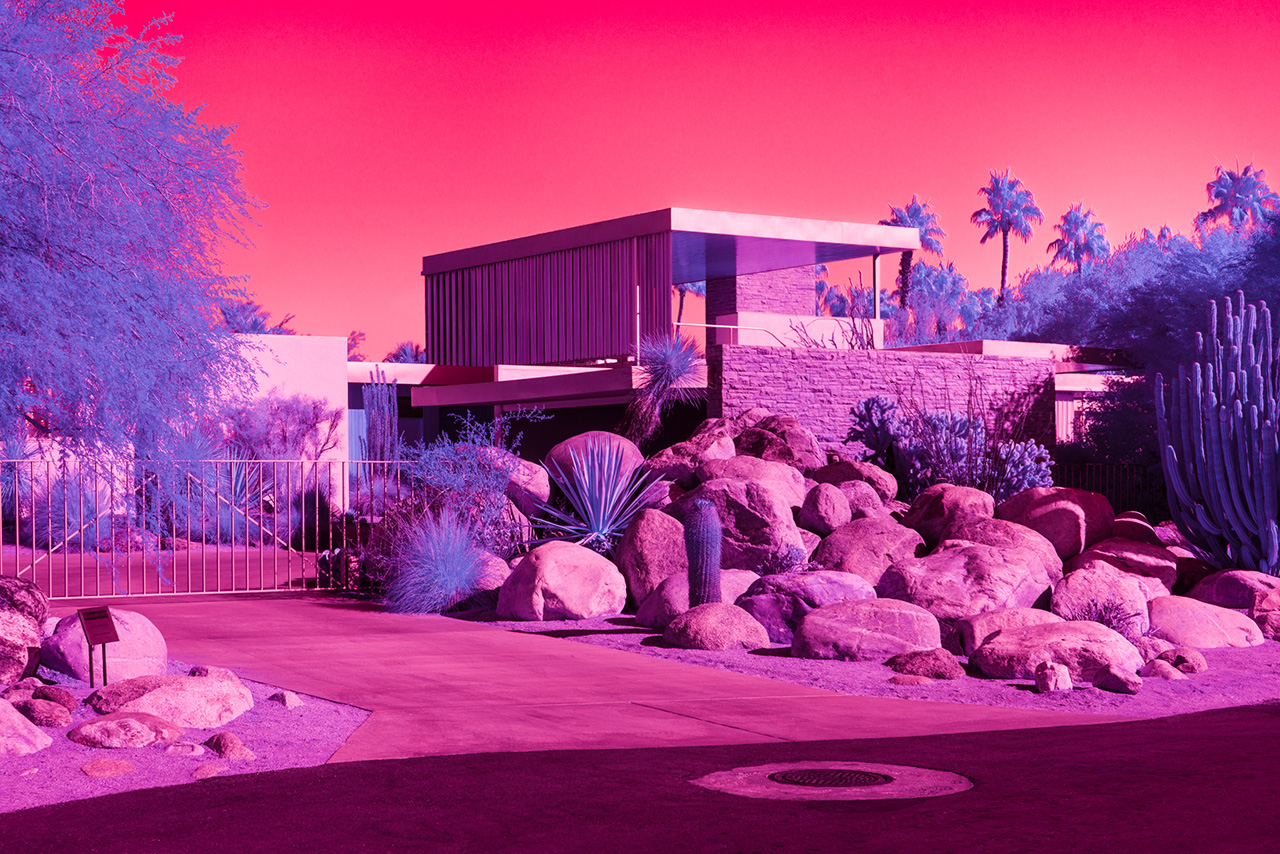 The history of Palm Springs is as much a history of those who would visit as those who never managed to leave. Many of those figures who have shaped the desert landscape as much as the elements have have been artists for whom the region has proven as restorative as the mineral hot springs from which it derives its names (where stagecoach settlers called it ‘Palm Springs’, the native Cahuilla people called it Se-Khi, or ‘Boiling Water’).

Think of Julius Shulman, the iconic architectural photographer, who immortalized the Kaufmann House designed by Richard Neutra long before Slim Aarons’ captured his iconic photograph, Poolside Gossip. Or of the legion screen stars of Hollywood who traversed the San Jacinto Mountains seeking respite from the pressures of the Studio System. Many plein air painters were drawn to Palm Springs because of the crystalline light. In 1932, Agnes Pelton, a desert transcendentalist painter stopped in the Coachella Valley on her way to visit fellow painter Georgia O’Keeffe in New Mexico and never left. She passed away in Cathedral City in 1961.

For the Australian photographer Kate Ballis, Palm Springs is a site that resonates with this same mythic quality, though it hasn’t yet managed to entirely engulf her to the point it did Pelton – for now, at least. For the Melbourne-based Ballis and her husband, the photographer Tom Blachford, the area has become something akin to a second home. Both have documented the area, its landscape and its singular architecture, extensively over the years through their respective practices. In the last five years, Ballis estimates they’ve visited more than a dozen times, and throughout that time, they’ve been embraced by the local community. So significant has the place become to both artists that they wed there in mid-October.

For Ballis, it was a matter of love at first sight. “As soon as I saw the mountainous backdrop of Palm Springs, I fell in love,” Ballis says from Palm Springs, recalling first arriving in the area in 2013 having driven from San Diego to see for herself the remnants of a place and time immortalized by artists like the photographic great, William Egglestone. “There is a slight haze in front of the mountains, and the extreme elevation of the mountains makes it look like a fake backdrop to a Hollywood set. Driving around the streets of Twin Palms and Vista Las Palmas, which are filled with iconic midcentury architecture and vintage cars, and hearing Robert Ember’s stories of the Hollywood jet-set felt like we were in a time warp.” That first love – of the landscape, with its lunar contours and otherworldly life – continues unabated. “I’m forever enchanted by the changing light on the mountains, the precise landscaping full of succulents, the Palm oases and the Martian landscapes of Joshua Tree National Park,” says Ballis. It is a love that has given her cause to explore other landscapes so arid as to appear alien. In recent years, Ballis has since travelled to Arizona, the Atacama Desert in Chile, the Perito Moreno glacier in Argentina and the deserts and salt flats of Southern Bolivia – all landscapes that she endeavours to render in a light that suggests they’re of worlds far more unearthly than our own.

Through her lens, the all-too-familiar visual tropes of life in the desert are cast in an entirely surreal light, one that somehow manages to straddle the divide between saccharine and sinister. A swimming pool turns blood red, the sky ablaze in a post-apocalyptic hue. The prickly spines of golden barrel cacti, yucca and Joshua tree are recast as plush ornaments strewn across a deep pile carpet dyed indigo.

A long-held fascination with unseen energy precipitated a movement in Ballis, formerly a media and entertainment lawyer, toward photographic abstraction of the kind that is keenly embodied in a new book, Infra Realism, that documents a body of work of the same name. The work of Richard Mosse, first seen by Ballis at the 2013 Venice Biennale, introduced to her the concept of infrared photography and its transformational properties, a device used to show a spectrum of light invisible to the human eye. Years after that seed was planted, Blachford helped procure for her a digital camera converted to full spectrum. She began first by collecting various infrared filters that made apparent the process of photosynthesis in healthy plants – the infrared lens painting plant life in wildly variant colours. For Ballis, the subversion of traditional photographic practices is as exciting as revealing what otherwise remains hidden. “[Infrared lenses] immediately highlight the fact that plants that look brown and somewhat dead and camouflaged are thriving in the desert,” says Ballis. “Even the Atacama Desert, which is the driest place on earth, harbours life.” Then there are slightly more obscure benefits. “My infrared filters make the wide variety of thriving [desert] plants jump forward and the hard work of the landscape gardeners who tend to the gardens once or twice weekly is honoured,” Ballis says. “In a cheeky sense, you can clearly identify synthetic grass, which does not emit infrared light.”

The filters that Ballis applies to her lenses are of the same kind used by farmers to assess the health of their crops. Healthy crops emit a lot of light, Ballis says, accounting for the great swathes of electric blue that are threaded through her work. Then there is her secondary palette of deep, blushing and fleshy pinks the colour of a well-deserved sunburn that coat the earth and the sky – light pink skies are dependent on how deeply blue the sky was on that given day. “That is to do with my filter and the subversion of those colours, like using an ND filter, that’s not to do with the infrared process,” Ballis says by way of clarification. As such, the midday sun is the most valuable asset in her considerable arsenal, as plants both absorb and emit infrared light as a byproduct of the photosynthetic process during those peak times. “My Infra Realism series is shot on a Sony A7R II, which has had the filter over the sensor removed to become a full spectrum camera,” Ballis says, describing the many tools of her trade. “I take two lenses and around eight infrared filters that each allows a different spectrum of light to pass through with me.” A new series, however, has required that Ballis up the ante on her kit to include two Nikon D850s, the Sony infrared camera, six lenses, the same infrared filters plus a dozen new filters – including one hewn from a swatch of vinyl sourced from a friend’s tailoring studio in New York. That new series will see Ballis turn her lens not only on the public histories embodied by landscapes both built and natural, but on her own.

“My new series is about exploring my heritage through the mythologies of the lost lands of Atlantis, Avalon and Lemuria and I want to suggest the fantasy that these lands still exist, just below the surface,” Ballis says, invoking her the desire that drives her: to make the invisible, visible. “My father was born in Crete, Greece, which I have aligned with the lost city of Atlantis, and I spent a month this year documenting his homeland through the lens of Atlantis. My mother was born in Somerset, England and early next year I will document this as the lost land of Avalon [best known from the mythology of King Arthur and Merlin] and I will document Australia and its beaches and jungles as the lost land of Lemuria [a mythic continent that is alleged to have connected Australia to South Asia and Africa].” Before then, however, Ballis has travelled to The Galapagos Islands, a destination that she says has long been on her bucket list. “I have many ideas as to how I’ll interpret the islands but will work it out when I get there,” Ballis says. As with her practice, only one element remains certain. Ballis will do so “definitely with an element of magic!”