Details from Papua New Guinean Bilum bags, produced in partnership with Among Equals
Credit: Courtesy of Among Equals

Caroline Sherman was wandering around a government trade fair in Sydney in 2014 when she was struck by a flash of amazing colour and pattern. A textile designer by trade, Sherman, who studied and worked in the UK fashion industry, had always been passionate about design, but what she saw that day struck a resonant chord.

“There was a group of indigenous women from Papua New Guinea demonstrating traditional weaving techniques”, she tells GRAZIA. “I sat with them for hours, I was so excited by their craft.”

Though Papua New Guinea is Australia’s closest neighbour – at its closes point, there are less than four kilometres separating the two countries – Sherman, like many Australians, had never visited. Her first encounter with the weavers from the country’s highlands would change that fact, and it was not long before Sherman soon visited the country later that year. Sherman, whose partner is the Academy Award-winning producer Emile Sherman, says she was initially hesitant to visit owing to the country’s record of violence. Whatever qualms she may have had were fast assuaged, however, by that introductory visit. “Travelling to the Highlands of PNG was an incredibly eye-opening experience for me,” she recalls. “It’s not an easy place to visit and it can be quite dangerous. It is stunningly beautiful but also home to horrific violence, particularly violence against women. There are so many tribal groups and over 800 languages.”

On arriving in the area, Sherman says she discovered that the primary form of income for local women is sales generated from Bilum bags – intricately crafted vessels that carry much more than their immediately contents. Woven from wool or natural fibres, the process of crafting a Bilum bag is a threefold one: first, fibre is sourced from local trees; it is then dyed using pigments created using berries, amongst other natural ingredients; finally, the weaver twists the yarn to create the fibre, after which time the bag is woven by hand. Owing to the availability of resources and the highly individual nature of the handcraft, each bag tells the story of its creator; designs used in the crafting process are also treated as heirlooms to be passed down between generations of women, who similarly pass the craft on to their daughters. And while they serve an important cultural function, the practicalities of their form allows for any number of functions, from carrying fruit and vegetables, to school books, and even small children.

“They are very practical,” says Sherman. “They fully expand and then spring back into the original shape. I was once told that the smaller the Bilum bag you use, the higher your status, as a small bag means you don’t need to carry around large packages. Implicit in their making is the story of the lives of these women – the same stories that would prove to have an indelible impact on Sherman. Their designs speak to the reality of their daily life and their embedded histories: fertility, animals, guns, poker machines, and even two-minute noodles feature in some of the designs Sherman invokes. “When you get married, your mother weaves you a diamond design Bilum; when you own a piece of land, you receive a mountain design. Each bag embodies a storytelling tradition – it is literally woven into the fabric.” The following year, Sherman launched Among Equals, a social enterprise founded with the hope that engaging directly with these artisans and paying them a premium for their work, the arduous sales process and lack of guarantee around actually making a sale could be eliminated, and thus, some of the hardship affecting the lives of those women and children in the Highlands of Papua New Guinea. Sherman made several return trips with the purpose of educating herself and meeting the weavers with whom she would be collaborating. It was there that she discovered that while the country is rich in resources, it is reliant on foreign investment, and jobs for locals are scarce. It’s common, however, for women to be the main breadwinners.

“Without a sustainable market, sales often depend on the whim of a few tourists, and, within the community, on the gifting of bags to each other. My initial idea was to commission my own designs, but the bags lost something that way,” says Sherman. “I quickly realised that each bag is a woman’s story and the designs are a visual language.

“When I asked the women what they most wanted, their wish was for a house where they could come together to weave, eat and rest,” continues Sherman. Conditions for the women and their families are harsh, she says. Running water, electricity and infrastructure are scarce or rarely available; housing too is poor, and access to health care and education, especially for girls, is limited. These communities function as patrilineal societies, and as such they don’t allow for divorce. The result, Sherman says, is “a serious endemic problem with domestic violence. Rape is frighteningly common. The women’s worlds are complex and often violent and insecure.”

With the money she says she has generated from the sale of Bilum bags through Among Equals – one hundred per cent of proceeds are reinvested into the communities – Sherman has built what she calls The Blue Haus. “It’s a ‘safe’ place with running water and electricity. In the past the women have been weaving by candlelight or kerosene lamp.” The women with whom Sherman works are full partners in the enterprise; the proceeds from every bag sold are redistributed directly into the lives of the three communities with whom she works. The exchange is an empowering one, says Sherman, that creates a sustainable income through traditional craft and not by providing charity. Sherman says that the money from one bag can help anywhere between 10 and 15 people; it contributes to everything from “the walls of the women’s homes, clothing for the children, education, schoolbooks, food and healthcare.” The Blue Haus, “a safe place” built with funds generated through sales of Bilum bags through the Among Equals social enterprise
Credit: Courtesy of Among Equals

“The money from Among Equals to the Goroka Bilum weavers has enabled the women to pay for all the little girls to attend school,” says Florence Jaukae Kamel, a liaison weaver who works closely with Sherman. “Your support has meant that we can pay for our healthcare, our traditional obligations and the things we need for our home. It has made a huge difference to us.”

In September, Kamel visited Australia to attend the opening of Bilum bags from Papua New Guinea, a recently opened exhibition staged by Among Equals that is currently on show at Sydney’s Koskela. Accompanying the exhibition is the premiere of a short documentary film was shot on location in Port Moresby and the Highlands of Papua New Guine on Sherman’s most recent trip in collaboration with the filmmaker Maximilian Homaei. “It is a real opportunity to gain an insight into the daily life of these special women weavers, and how the sale of Bilum bags is directly impacting their lives,” Sherman says of the documentary. “It also highlights the natural beauty of PNG and the strong message that by buying a bag you can transform the lives of these communities.” She adds that she did show the documentary to her partner Emile, who gave what you can imagine would be indispensable feedback from an Oscar winner. It’s Sherman’s hope that he will accompany her on her next trip.

Over the course of the next year, Sherman is looking to expand the reach of her program to involve more communities across the region. “At the moment we are working with approximately 100 weavers. My aim is to work with 500 women in five years.” To hear Sherman tell it, it would appear as though she already has this one in the bag.

Tile and cover image: Courtesy of Among Equals 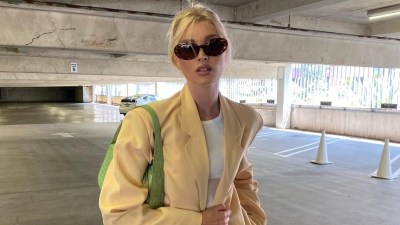