5 minutes with designer of the moment Georgia Alice

As one of the most anticipated shows of the week, the Loading Dock at this morning's MBFWA show was bursting at the seams with representatives from Bergdorf Goodman, Net-A-Porter, Harvey Nichols, Lane Crawford and Selfridges.

It’s refreshing when a label comes along and surprises you with it’s simplicity. In this day and age of trend-churning fashion, New Zealand newcomer Georgia Alice’s appeal lies in the quiet luxury of clothes that are made to be wearable. The pieces that are called upon season after season as opposed to being peacocked in and then left to wilt after one statement-making wear. Because, while we all appreciate the power of a signature dress (an Australian fashion week hallmark) not since the emerging days of Dion Lee and Ellery have we seen a label with such elegant restraint. And the buyers’ interests are well and truly piqued. As one of the most anticipated shows of the week, the Loading Dock at this morning’s MBFWA show was bursting at the seams with representatives from Bergdorf Goodman, Net-A-Porter, Harvey Nichols, Lane Crawford and Selfridges.

GRAZIA stole 5 minutes with the lady of the hour – who was in our opinion, startlingly relaxed, just moments before first looks stormed the runway this morning. How are you feeling?
Surprisingly relaxed. There’s been so much work leading up to this now there’s just nothing I can do back sit back and enjoy the moment.

There’s a lot of chatter around MBFWA this week about you being the one to watch how do you feel about that?
It’s really flattering more than anything. It’s lovely. We’ve got some great international  department stores viewing the collection directly after the show so I’m probably more nervous for that as opposed to the actual show because the show itself is an expression of my creative life which whereas the buying side is a little more technical.

What were you doing this time 10 years ago?
I moved to Sydney when I was 15 to study classical ballet and I was training full-time here and then I moved back to New Zealand to study fashion. Did you ever think back then that you would become a fashion designer?
No way! Never. I didn’t even know you could pursue fashion as a profession, being from Christchurch there was not much of an appetite for it. When I moved to Sydney I realised that there was so much opportunity in fashion.

What was the first piece you ever created?
I did this beautiful wool crepe sort of long t-shirt dress that had heaps of flare and was quite short. I still wear that now.

Is that a piece you reference now when you’re creating new collections – do you have hallmarks of design like that?
Yes definitely – you have a filter like that when designing a range and I think when I started GA I started it with a vision of just designing pieces that i thought woman needed in their wardrobe. So everything was monochromatic, there were baggy jeans, some nice t-shirts and then some more elevated pieces but it was then and is now really about keeping things as wearable as possible whilst still retaining that aspirational quality.

Talks us through this collection and how it’s moving you forward as a designer?
This is my first Resort collection and I went to Paris this year and it opened my eyes a lot and really helped me realise what I wanted to say as a designer. I was really inspired by a Swiss artist and the idea of the ease of coastal living. I feel like I have a lot of amazingly experienced people around me now and this collection just felt so easy when it was coming together. The opening look is a good piece that states what the collection is all about – it’s really simple and straightforward.

If you could dress anyone in the world in that look who would it be?
I have an obsession with Emma Watson but I’d probably have to find an organic cotton for her I think. I’ve always been secretly obsessed with her since Harry Potter and now that she’s become a spokesperson for females being strong independent women and it’s a really modern topic. She’s the kind of modern woman I design for. 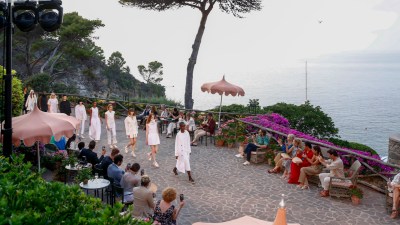