In honour of husband Tom Brady's sixth Super Bowl win today, we round up Gisele's most iconic hair and makeup moments

Today, Tom Brady played in his ninth Super Bowl. The Patriots quarterback has already won five, and right now is celebrating his sixth Super Bowl win, as his Patriots become the 2019 Super Bowl Champions. At 41, he is not only an incredible force of the game, but a giant of sport as a whole. And by his side, his wife and mother of their two children, Gisele Bündchen celebrates with him.

All this has got us feeling a little nostalgic. Remember, Gisele was – and always will be – one of the most iconic models of all-time, and a beauty muse for many. Who could forget baby Bündchen with that sun-kissed freckle face and long brown waves? Or her major Met Gala moments of slicked hair and glossy skin? So we’re celebrating the Patriots win a little differently, with a makeup and hair homage to one of fashion’s greats, Gisele Bündchen. 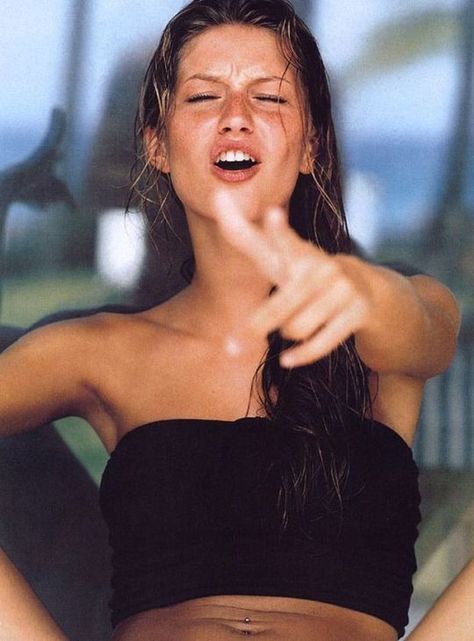 Etching herself as the supermodel of her generation, Gisele became somewhat of a beauty chameleon, chopping and changing her look according to designer demands and editorial whimsy. But, she did have her own kind of infallible beauty look: scrunchy sandy beach waves, a lick of mascara, soft pink lip stain and bronzed skin with a smattering of faint freckles. It was her take on typical Brazilian bombshell beauty – understated yet innately glamorous, she championed both natural beauty and high-octane glamour like no other, with many still referencing “Gisele waves” and “Gisele skin” to this day. 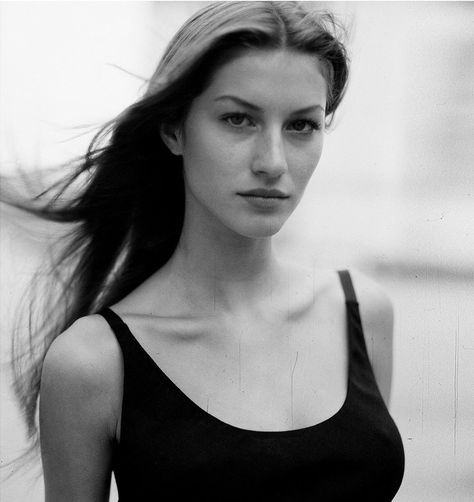 From baby B’s long dark locks and cute freckles to her Amazonian red carpet glamour, here, 12 of Gisele Bündchen’s most memorable beauty touchdowns, because of course, 12 is the number Brady wears on his back. 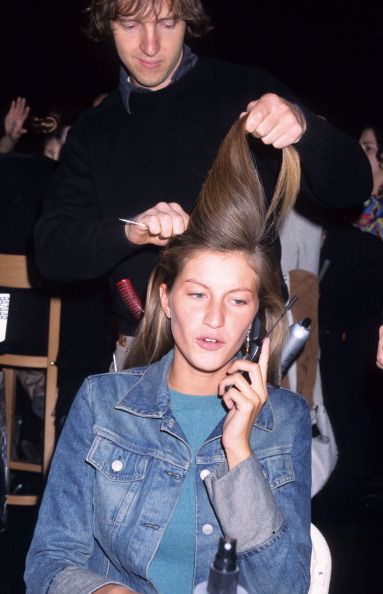 1. The Bronde Beach Waves
One of Gisele’s greatest beauty legacies is her hair, namely those rumpled, irreverent beach waves she made so very famous in the early 00s. While these had a little lift as the years went on (with thanks to a long Victoria’s Secret contract), going from scrunchy and natural to slightly more curly and set, whichever form they took, the tousled wave was a beauty constant for Bündchen. 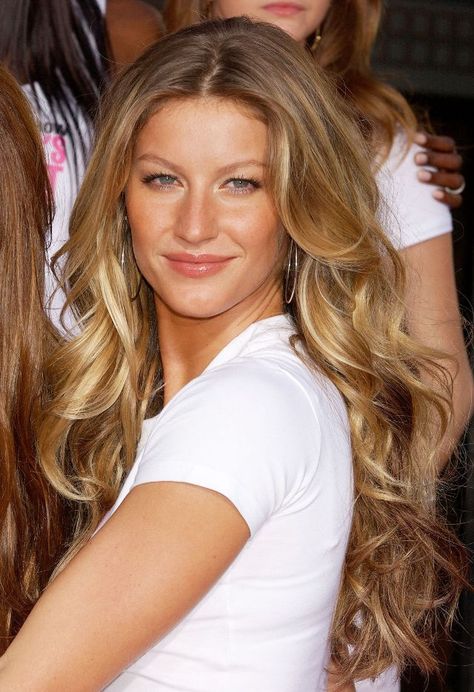 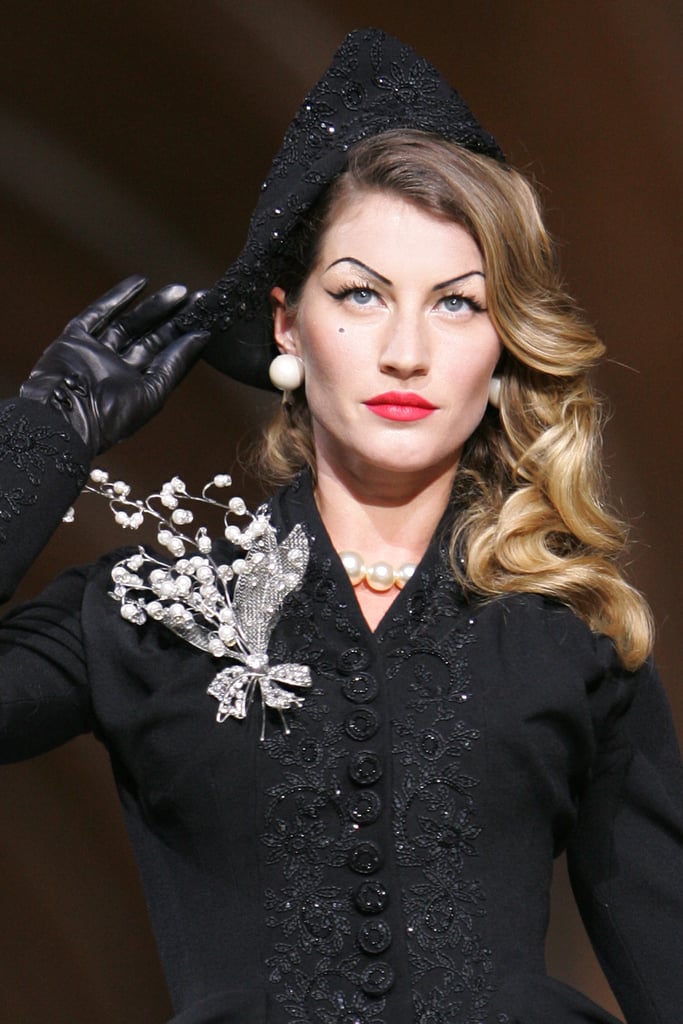 3. (almost) Makeup-free for Vogue Italia
Last year, the Super fronted Vogue Italia’s February cover with minimal makeup; natural skin, bare eyes and brushed brows, it was a history-making moment for a title who typically touts the made-up and theatrical, plus made a lovely case for understated beauty – something close to Gisele’s beauty heart. 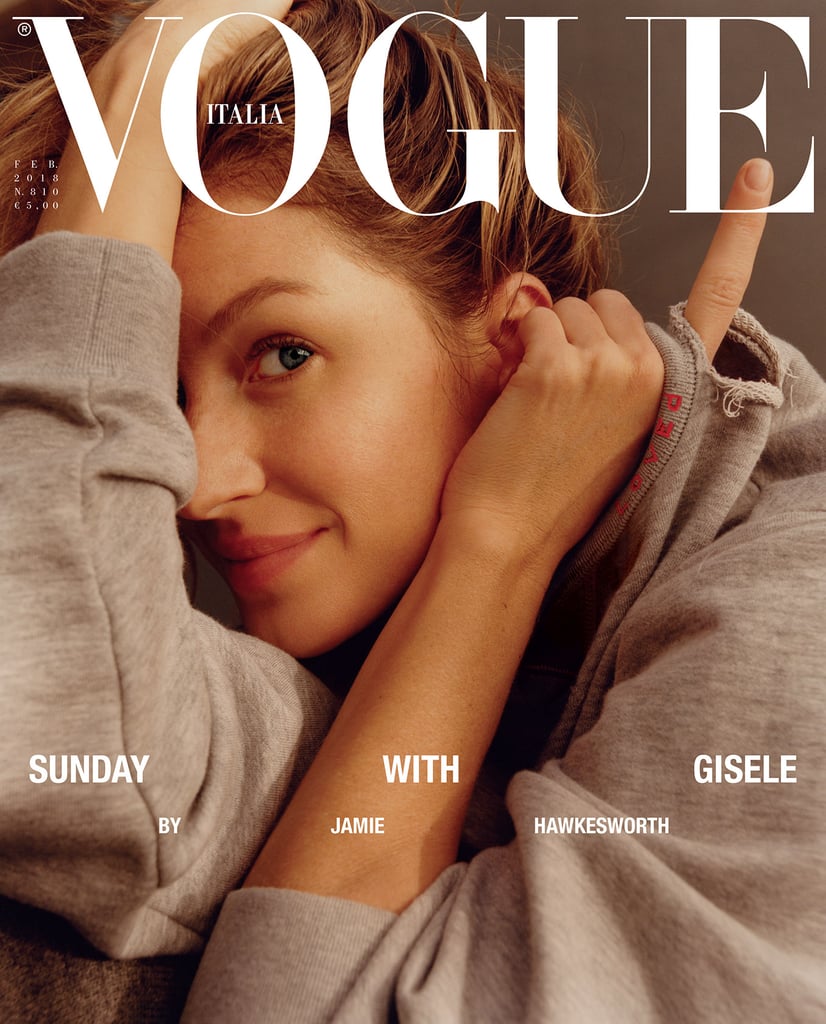 4. The long, brunette days
When the 14-year-old Gisele was discovered in a São Paulo shopping mall on a school excursion, she had thick brunette hair that sat at her waist. This long, auburn mane accompanied her throughout the start of her career, as she went on to cement herself as a bonafide Super, her hair her calling card. 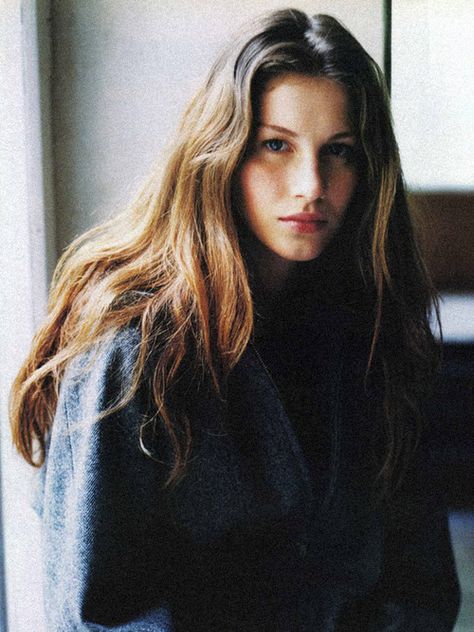 5. OG Victoria’s Secret Bombshell Beauty
One of the most iconic VS angels of all time, Gisele’s Victoria’s Secret Beauty had somewhat of an evolution. From the ironed-out ends of 2001’s Fashion Show (below) to the big-barrelled bounce of 2004, and the mighty blow-out of her final walk in 2006, one thing prevailed: unequivocal glamour. 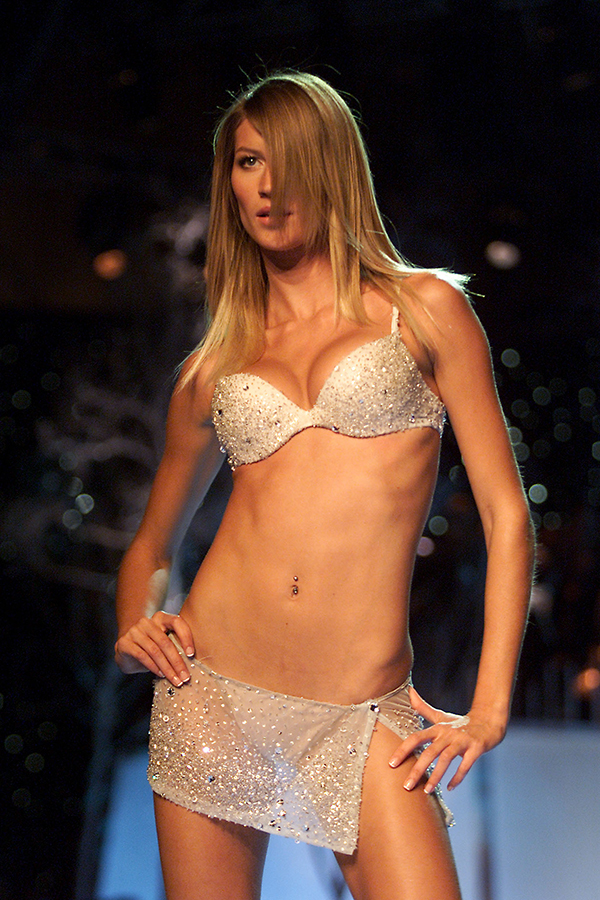 6. Bronzed Goddess At The 2005 Academy Awards with Leo
The profoundly private Leonardo DiCaprio made scenes at the 2005 Academy Awards, taking his partner, Gisele, to the Oscars – a first for the actor. While Gisele made her own waves, literally, sporting derrière-skimming honey blonde waves and sun-kissed skin for her first red carpet appearance with then-boyfriend Leo. 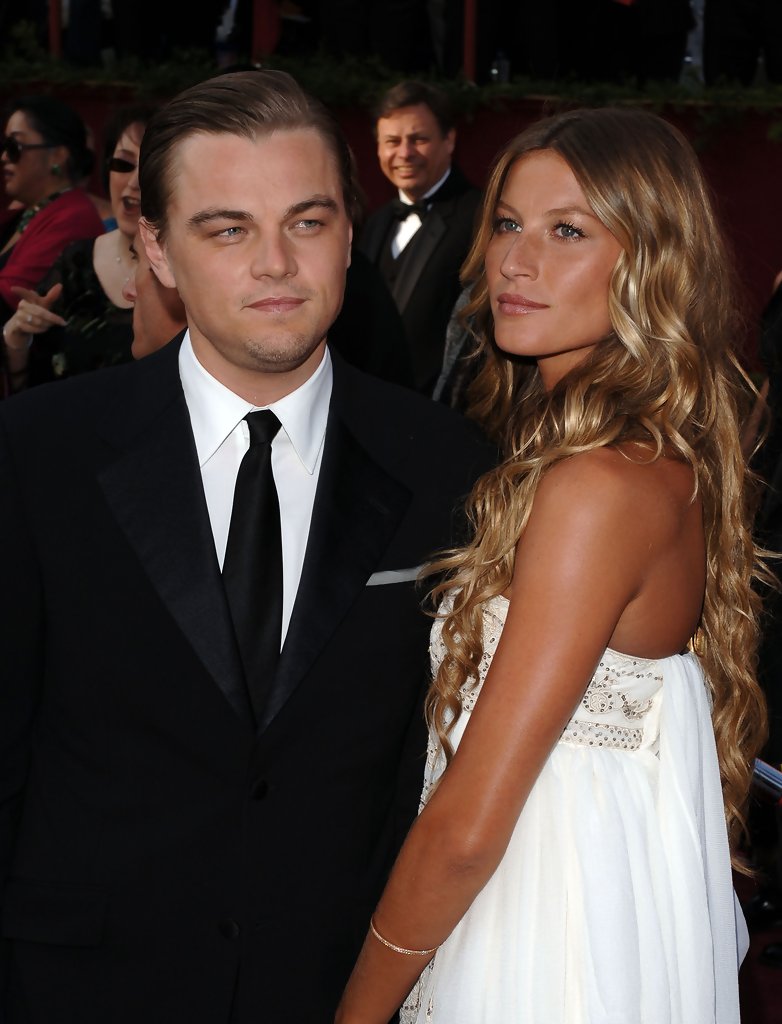 7. Gold Eyes at the 2018 met gala
One of her most recent beauty highlights, Hung Vanngo went gung-ho on the glitter at the 2018 Met Gala, hamming up Gisele’s eyes with ample gold sparkle (a nod to her Versace gown), big lashes and a baked guise. 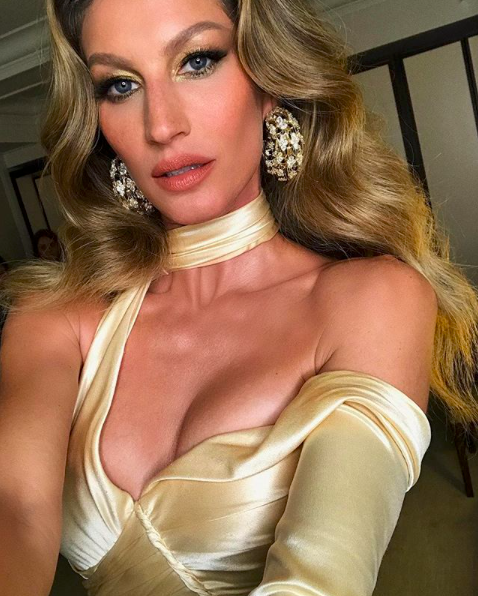 8. Freckle Face
Baby B was all about embracing her freckles, forever letting them shine through both on and off the runway. She was an early proponent of the freckle movement; showing off a cute sprinkling of freckles across the bridge of her nose and cheeks. 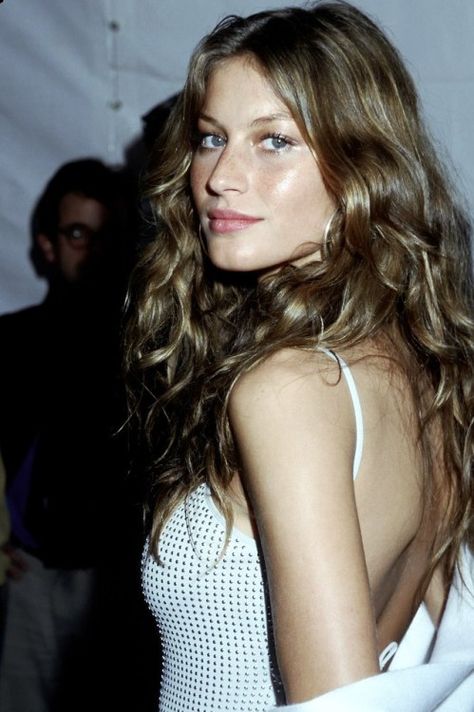 9. Ombré Hair At Alexander Wang
At Alexander Wang Fall 2012, Gisele made a chic case for regrowth, sporting deliberately darker roots against that famous sandy blonde in what would become one of the biggest hair trends of the decade: balayage. 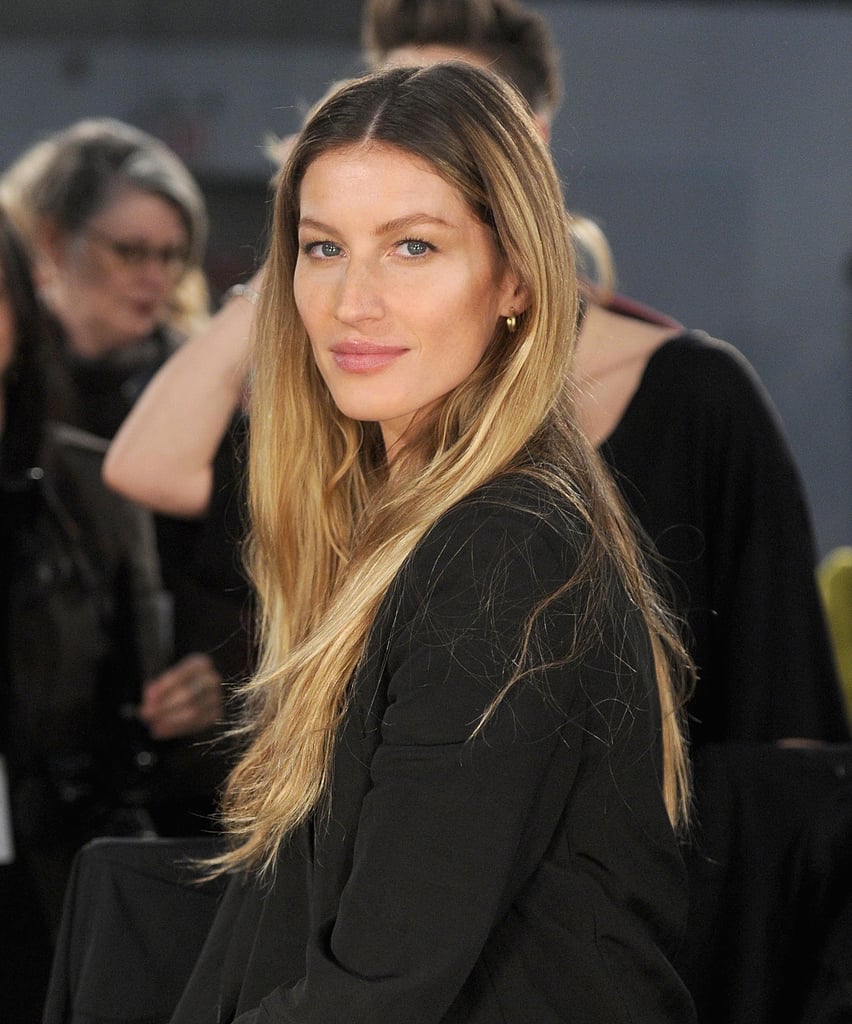 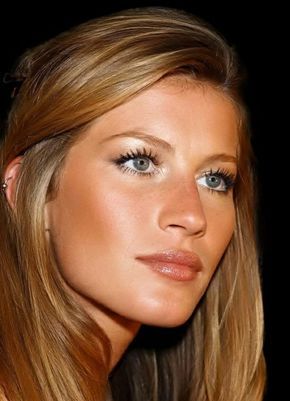 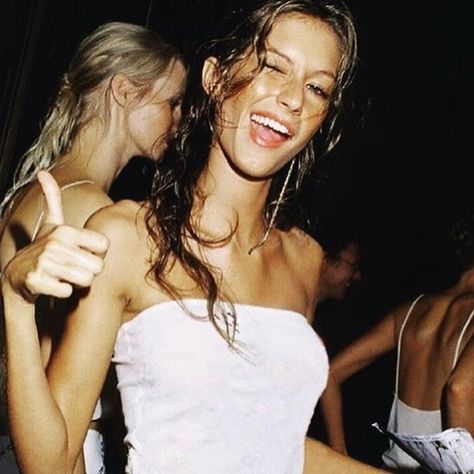 12. Her slicked Met Gala Up ‘Dos
Each year, Gisele made quite a habit of wearing her hair up and off her face at the Met Gala. From the slicked-back, twisted bun of 2008 to the tousled high ponytail of 2017, we’ll leave you with this high pony from 2010. And this bit of Brady Bündchen PDA. You’re welcome. 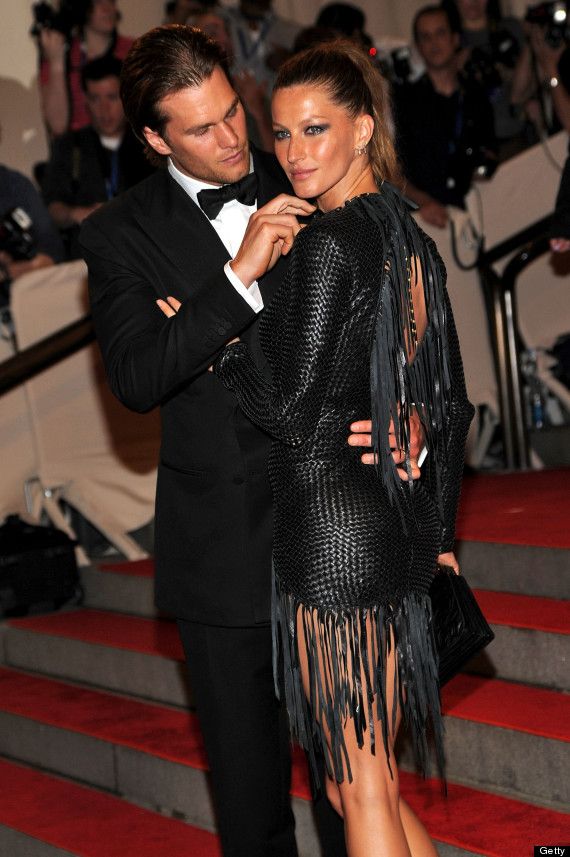 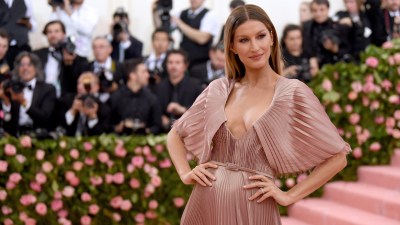